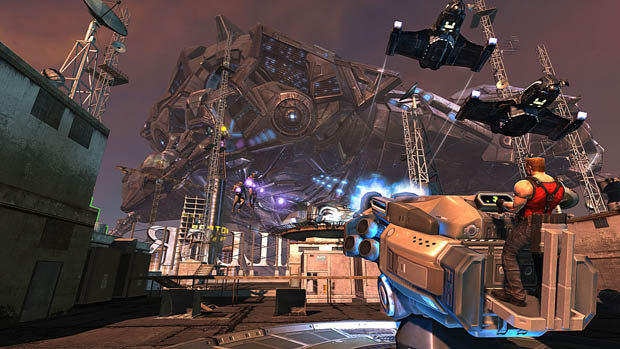 You know, it feels weird to be writing this, but I’m disappointed that Duke Nukem Forever has turned out to be unrepentant, irredeemable drek. I turned my nose up to Duke Nukem 3D back in the day because it seemed crass and childish, but after playing Forever last year when it resurfaced at PAX Prime, I had a change of heart. I mean, yeah, the series and its hero are crass and childish, but so are a lot of games these days. At least Duke could claim to have gotten there first. And, really, in retrospect, Duke 3D was pretty mild and inoffensive — a little swaggering bombast serving as the patina atop an occasional harmless boob joke and a non-stop string of empty movie references. Hell, that pretty much describes the entire Metal Gear Solid series in a nutshell.

What I liked about Forever, at least at first glance, was the very datedness that critics initially decried. The action has a slow, deliberate weight to it, and the level structures seemed to hearken back to a time before railroading corridors and rhythmic set pieces. I actually miss old-school shooter design quite a bit and wouldn’t mind playing something that felt like a BUILD/Marathon/Doom engine game in high definition. Unfortunately, that’s not really what Forever turned out to be.

Watching my coworkers plod their way through the game, I’ve been struck by how generically contemporary it seems. There was one shootout environment in particular (against brain-dead monsters with no apparent A.I.) that made me wonder if it was a Covenant stage or a Flood level. I’d have been perfectly happy with a game that played like a relic from 1998 with lots of random ridiculousness thrown in and a non-stop string of droll movie quotes and macho epithets, but that’s not what we got. Instead, it’s a poor man’s Halo-alike whose attempt at a sense of humor is downright mean-spirited and cruel rather than wry or ironic.

I guess what I’m saying is that if you’re one of those people who still feels compelled to buy a new game every week, grab Child of Eden instead of Duke Nukem Forever. On the sliding scale of vices, I figure a simulation of dropping acid is ultimately a lot less harmful than a gleeful celebration of naked misogyny.

19 thoughts on “Better never than late”