I do not consume as many soft drinks as I used to, although given the amount of aspartame I’ve guzzled over the past 20 years it’s probably too late to keep my brains from being eternally pickled in chemical brine, even if I stopped cold turkey. Every once in a while, though, I come across a random boutique soda at the local fancy-pants grocery store that compels me to pick it up and try it. The last time that happened was with a pinot noir soda about a year ago, and it was disappointing enough to put me off further experimentation until today (it was grape soda made with pinot noir grapes, and it tasted like… grape soda). But while out picking up a gallon of milk this afternoon, I came across a brand called Dry Soda, which comes in unusual flavors like lemongrass, rhubarb, and this: 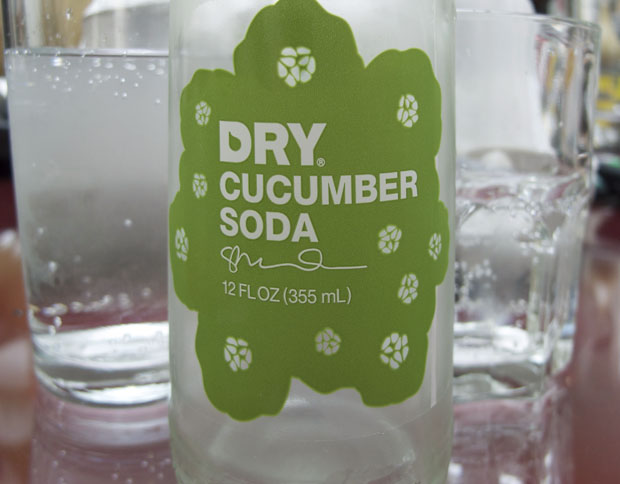 Cucumber soda! That’s wacky. So wacky I had to try it.

If nothing else, I like the premise of Dry Soda. It’s sold on the promise of being made with only four natural ingredients (which is kind of a cheat, since it counts “natural extracts” as a single ingredient) and promotes itself as being “less sweet.” Basically, it’s carbonated water, sugar, and natural flavors, with the sugar being added in more moderate portions than in your usual Coke or Pepsi (which in turn means about a third of the calories per servings). As for the drink, well….

…actually, I liked it. It really isn’t particular sweet, and the flavors are added in nice sensible quantities so that the cucumber flavor isn’t totally overpowering. It’s not entirely unlike tonic water with a bit of cucumber juice in it (minus the quinine flavor), and it’s totally decent.

Cat didn’t like it quite as much. She uses a lot of facial cleansers that are made with cucumber, so she couldn’t take a sip without feeling like she was about to quaff an exfoliating scrub. I can understand the reluctance there. In any case, I don’t think I’ll be buying this again. It’s decent and interesting, but not so delicious and unique that I can feel good about paying two dang bucks for a 12-ounce bottle. Although! I bet it would make for a pretty good Pimm’s Cup. Using this stuff instead of ginger ale and muddled cucumber — it’s so crazy it just might work.