Sorry, kids, it’s another food post. Man cannot live on games alone, you know? I must confess, tragically, that I have been trying to expand the scope of this site back to more of what it used to be, before it became “the place where GameSpite Quarterly stuff gets reprinted.” There’ll be reprints, don’t you worry! But it needs more original content, too, you know? And after having been around video games all day every day for nearly eight years, sometimes it’s good to write about something different. My apologies if this angries up your blood. Feel free to stop visiting, if you prefer; I won’t take it personally. Unless you make fun of me. I mean, who wouldn’t take that personally?

Anyway, the title of this post makes a little more sense (and is a lot more crass) if you realize that bánh mì is pronounced, approximately, “bang me.” I’m all for proper pronunciation, but I always feel a little naughty ordering one of these things.

So, yeah, bánh mì. Today my coworker Alice asked if I knew of any good bánh mì places around the office. I only knew of two, neither of which has a particularly great reputation, but I told her I’d tag along and try a new place with her. She agreed… and then left without me shortly after. Monstrous. So, thus stymied, I ventured out on my own and decided to forego bánh mì in favor of trying a new place I’d noticed last week and which someone even recommended in the comments thread of the other day’s Sushirrito post: a Korean-looking place called Spice Kit.

By a completely bizarre coincidence, care to guess what they sell at Spice Kit? 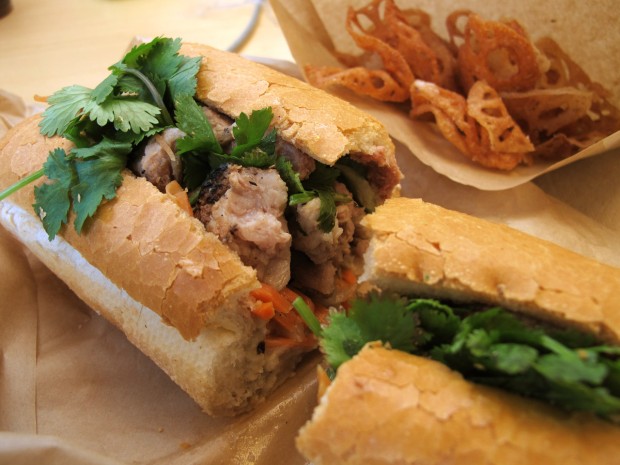 Yup, bánh mì. They sell some other stuff (specifically, salads and Korean wraps), but I figured I shouldn’t spurn wacky cosmic coincidences. I ordered the pork bánh mì and a packet of lotus chips.

Now, if you’re not familiar with bánh mì — though you should be now that the term has been added to the Oxford English Dictionary — they’re basically the only good thing to come of Vietnam’s French colonialism. The French introduced into Vietnam the idea of sandwiches, French bread, and paté, resulting in these fantastic mini-meals. A good bánh mì is fresh, delicious, filling, and incredibly cheap. (If you pay more than $4 for a bánh mì, you’re doing it wrong.)

And right there is when I had my first ominous foreboding about Spice Kit. The bánh mì pictured above — pork with paté — cost a preposterous $8.50. I could see paying that much at The Slanted Door or something, but that’s because it would be served on a plate of truffle dust by a man in a nice suit. Spice Kit’s decor reminds me of Chipotlé.

But hey, I thought, maybe this is some super-fancy sandwich that’ll totally be worth it. It wasn’t. By the time I walked the two blocks to my office, the mediocre mayonnaise they’d slathered all over the sandwich (nowhere near as buttery and rich as the stuff I’m used to) had soaked through the bread and started to cause the thing to fall apart. The paté spread — which costs an extra 75 cents — was scraped so thinly across the bread I longed for an electron microscope to confirm its presence. The pickled carrots and radish were far too sweet, and they overdid it on the jalapeños, too.

Worst of all was the meat. The meat! Bánh mì pork is supposed to be thinly sliced, marinated, and grilled in that inimitable Vietnamese way. This stuff lacked the amazing flavor of Vietnamese pork and was cut into chunks that refused to stay inside the bread; worse, about a quarter of them were just fat, no meat. You know, there’s nothing worse than ending a meal with one final bite that’s worse than the rest of the dish you’ve just consumed, and that’s exactly what happened here: the last bit of sandwich turned out to be a rubbery chunk of fat in soggy, sweet, mayo-soaked bread. Yuck.

On the plus side, the bread that wasn’t water-logged was quite tasty, and the chef shares my belief that there’s no such thing as too much cilantro. Otherwise, though, this was a sandwich that cost twice as much as the ones that are available from about half a dozen places within 10 blocks of my apartment… and was about half as good.

So, I guess what I’m saying is, if you ever end up in San Francisco and feel like eating a bánh mì, don’t get it here. As for myself, I’ll be spending next week in Irvine, so the best bánh mì on the west coast (specifically, in Westminster) will be a short drive away. I foresee palate-cleansing in the near future.

P.S.: Video games! There, now everyone’s happy. Except my mouth :(

29 thoughts on “BakeSpite: Banh mi right in the wallet”