San Francisco isn’t really the obsessive foodie town that New York City is, but occasionally we get the tempest-in-a-teacup rendition of NYC’s brief, mercurial food obsessions — the ones where a restaurant becomes impossibly popular for a few months, then fades to near-irrelevance as the fickle public moves along to the next big thing. Lately, I’ve been watching this phenomenon in action around the corner from my office at a place called Sushirrito.

The concept is pretty well embodied right there in the name. Sushirrito aspires to be sushi! And a burrito! All in one! This idea is not entirely impossible. Fusion burritos can be pretty rad. Kimchi kal bi burritos? Amazing. Thai burritos? Potentially good! But raw fish burritos? Ehm…

Anyway, Sushirrito has, since opening about six weeks ago, consistently had a line out the door and around the corner — a line so terrible they have to put orange safety cones around the doors of nearby businesses to keep the hungry masses from creating a fire hazard. I’ve been morbidly curious about the place, but not enough to wait in line for half an hour. Who has that much time to squander during the day? Honestly, now. Today, though, I walked past and the line was less than five minutes long. So I figured, what better day than April Fool’s to try a sushi burrito? And so: 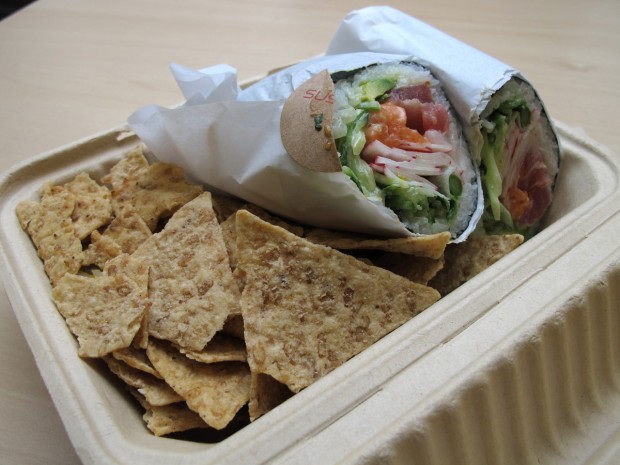 So here’s the thing about Sushirrito: it’s not really a sushi burrito. It’s basically a place that sells half a dozen different somewhat fusion-tinged maki rolls and serves them by cutting them in half rather than into eight or ten thin slices. These are wrapped in paper and optionally served with fried rice chips.

Herein we learn the importance of presentation. By dishing up sushi rolls as though they’re burritos, Sushirrito loses something important. Namely: the ability to properly enjoy the very delicious ingredients. 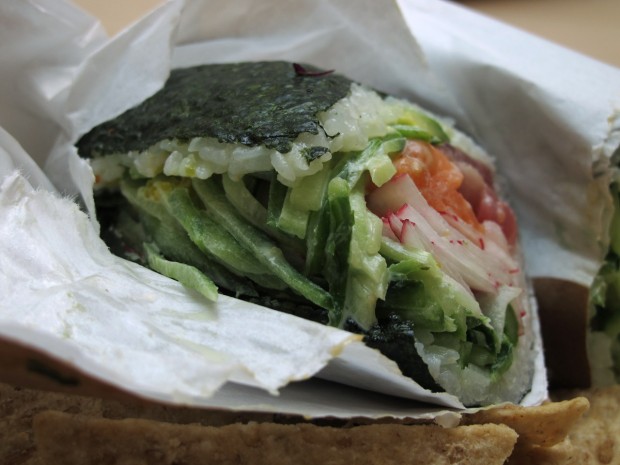 I’ll give Sushirrito this much: They use really good ingredients. I ordered the Three Amigos (ugh, that name), which is salmon, red tuna, and yellowtail served with avocado, cucumber, radish, yuzu tobiko (which is what sold me on this choice), and wasabi mayonnaise. These are then wrapped in rice and nori. Each and every one of the ingredients is delicious. I don’t even like mayo, but here it was applied sparingly and basically became creamy wasabi. The fish was fresh and tasty, and the yuzu-infused tobiko added a faint, sharp mouth heat to complement the sinus punch of the wasabi. The veggies were crisp and gave the roll a nice texture. All in all, great stuff. And one roll comprises a full meal and runs between $8-11, which is what you’d pay for a much smaller roll at a normal sushi place. I even like the rice chips, which are basically tortilla chips that had a baby with a rice cake.

The problem, though, is in how it’s served. A sushirrito is freaking huge. You cannot possibly fit your mouth around it, even if your mouth is gigantic like Julia Roberts’. So you’re forced to take small bites, and this means you can never get a taste of all the ingredients in a single mouthful. You either get a big bite of delicious soft fish, or a big bite of delicious crunchy vegetables, but never both. This is, I think, rather missing the point. A good maki is appealing precisely because it brings together complementary flavors and textures into small pieces that can be completely enjoyed in a single bite.

It’s a shame, really. If the place would drop the cutesy burrito gimmick and just sell the things cut into normal maki slices, I’d probably give it a hands-down recommendation. Instead, it’s an example of tasty food being undermined in a bid for the attention of San Francisco’s short-attention-span-suffering lunch masses. Maybe when the place is no longer trendy they’ll add the common sense version of their rolls to the menu, wherein you can eat small, sensible slices. Until then, I’ll stick to the Soup Company. The lines are shorter, and they never bungle their presentation by serving chowder in a champagne flute or something dumb like that.