BakeSpite: St. Patrick’s Day is the worst holiday of all (and it’s all McDonald’s fault)

The set of desks in our office where Travis Williams, Mike Cruz, and Frank Cifaldi sit together is basically a cauldron of bad ideas, a fiery pot that simmers with menace until the day’s misguided inspiration bubbles to the top and bursts in our faces. Today’s bad idea? “I wonder if McDonald’s still sells Shamrock Shakes? We should go find out!”

For some reason, I decided to tag along. Like everyone else in our troupe, I had never consumed a Shamrock Shake, but I’ve always been curious. Mainly, I suppose, because I feel a vague affinity for St. Patrick’s Day, it coming a day after my birthday and all. What do you call it when you do something stupid and you’re well aware that it’s stupid but you plunge headlong into stupidity anyway? Whatever that term is — lack of survival instincts, perhaps — I knew I was suffering from it. But I went along with it anyway. 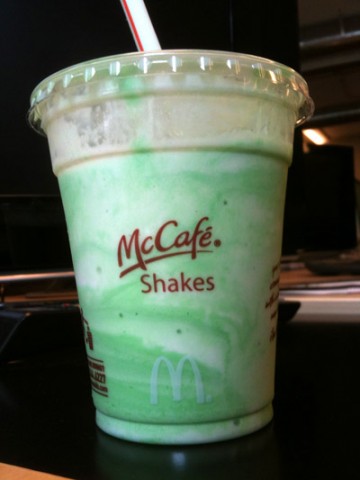 Guys, Shamrock Shakes are terrible, and I’m talking terrible by the dubious standards of McDonald’s. Or what I recall as their dubious standards — admittedly, the only thing I’ve eaten from McDonald’s in the past seven years was a couple of their fake Chic-Fil-A sandwiches back when they were packing coupons for free ones in Amazon.com orders. I like my health, and I like food that is made of recognizable ingredients and tastes good, so McDonald’s and I don’t spend much time together.

Let’s deal with the obvious fact that this thing looks less like a milkshake and more like someone melted a bar of Irish Spring soap into a cup. Points for being all Irish-y with their St. Patrick’s tie-in, I guess, but I feel like that’s simply a given from a place with the name “McDonald’s.” Minus points for looking like something I should rub against my body instead of putting inside my body. On the other hand, maybe I should give them credit for that. Usually McDonald’s isn’t so forthcoming about the fact that its products aren’t appropriate for human consumption.

Like all McDonald’s shakes, the Shamrock Shake is a cold slurry that almost resembles dairy, except that it’s a little too gritty and slimy and seems more like drinking a petroleum-based product. You know, like frothy Vaseline or something. Flavor-wise, though, the Shamrock Shake tastes almost exactly like someone blended Scope mouthwash into a vanilla shake.

Hmm… Dial soap; Vaseline; Scope. I see a theme developing here. If this were a beauty product review, I’d say McDonald’s knocked one out of the park! But since we’re talking about a dessert, something clearly went horribly wrong. But at least I lived to tell the tale, and with only moderate intestinal discomfort! When it comes to fast food, that’s a victory. Rating: A PLUS PLUS

12 thoughts on “BakeSpite: St. Patrick’s Day is the worst holiday of all (and it’s all McDonald’s fault)”