As fond as I am of BakeSpite, the joint food-blogging venture I launched at the beginning of last year with my special lady friend, the prospect of maintaining two blogs (in addition to what I have to do for work!) is just too daunting. So, after much deliberation, I’ve decided to consolidate. We will, from time to time, be writing about food here on GameSpite. If this offends you… man, I don’t know what to tell you. Don’t get so bent out of shape about other peoples’ harmless hobbies, I guess?

Anyway, to kick things off, I am going to talk about a ridiculously delicious cake I had last night. It was called a pie, which is confusing, but whatever. It was good. Really, really good. 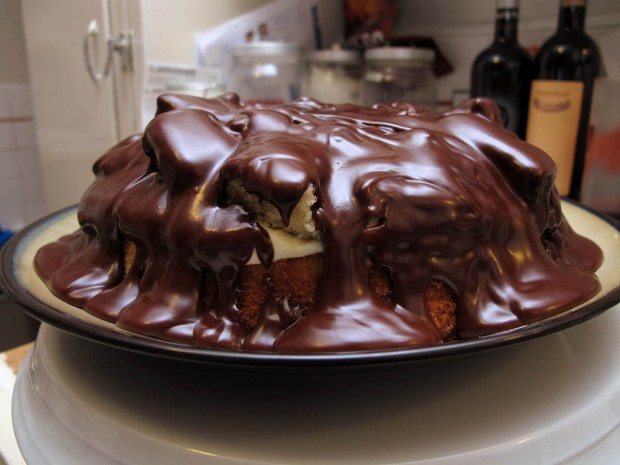 For my birthday, Cat baked me a Boston Creme Pie. It is a cake, though. But the cake in this instance was in fact used somewhat like a pie shell. So, in a sense, it’s both at once.

The history of this dessert will actually be explained in detail on tomorrow’s episode of “Games, Dammit!” because I know that people listen to video game podcasts to hear about my thoughts on food. A quick summary, though: The night before I left for PAX East, we flipped past Bobby Flay’s TV show “Throwdown,” wherein he travels around the U.S. challenging popular chefs on their own terms. I’ve noticed he almost never wins, which I think is a deliberate feature of the show… either that or he becomes confounded when he cooks things that can’t easily be adapted into a Southwestern style. Boston Creme Pie, for instance: not so good with corn salsa and roasted poblano peppers.

As we flipped channels, we happened to notice the theme was Boston Creme Pie, and the defenders’ recipe looked amazing. Then I traveled to Boston and had Boston Creme Pie, but while it was tasty it also wasn’t the rad version I’d seen on the show, so I wasn’t quite satisfied. Thus, Cat dug up the recipe and baked it for me, and it is probably the most complex thing she’s ever baked. But it turned out wonderfully.

The unique hook of this particular recipe is, as I mentioned, the way the cake becomes a pie shell. As such: 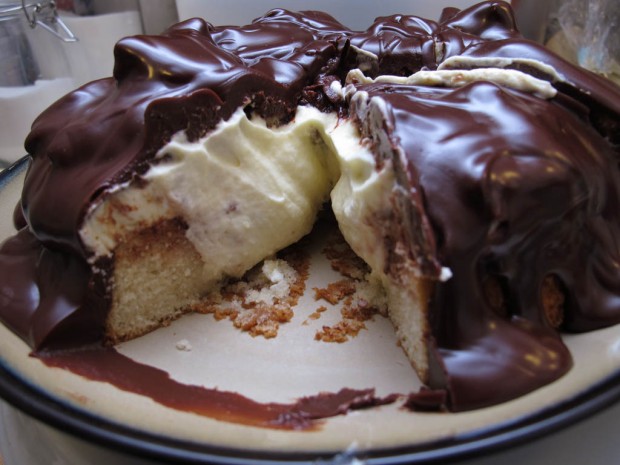 You start by baking a cake and letting it cool. Then you scoop out most of the cake and pour vanilla custard into the hollow. Then you cut the scooped cake into cubes and drop the pieces onto the custard. Then you pour a chocolate ganache over top and refrigerate immediately. It is fantastic. I honestly like it much better than the Boston Creme Pie I had while I was in Boston, and that particular pie came from one of the city’s most popular bakeries! Amazing what melting down two pounds of chocolate with a pound of butter will do for a dessert.

The one shortcoming of this recipe is that it’s huge and ended up resulting in two of the full-sized cakes you see above. (Plus we had a ton of creme and ganache left over.) We’ll be hard-pressed to finish just one cake before the fresh cream in the custard goes funny, so we had to give the second cake to our upstairs neighbor. Crazy, right? Now you wish you lived above me for some reason besides your weird, stalker-y obsession.

P.S., per request, the recipe Cat used is here.