Madness? This is… uh, shadow!

Working on GameSpite Quarterly 8, our PlayStation anniversary issue, has set me to thinking about a lot of the games of that era, both good and bad. I’ve revisited several games and found that some have held up beautifully (The Misadventures of Tron Bonne), some are good but a lot different than I realized (Parasite Eve), and some are… not so great as I used to think (Strider 2). These rediscoveries have set me thinking about other games of the era, and I’m curious to revisit them. So I dropped a couple of bucks on eBay to pick up one of the strangest works of the PS1: Shadow Madness. 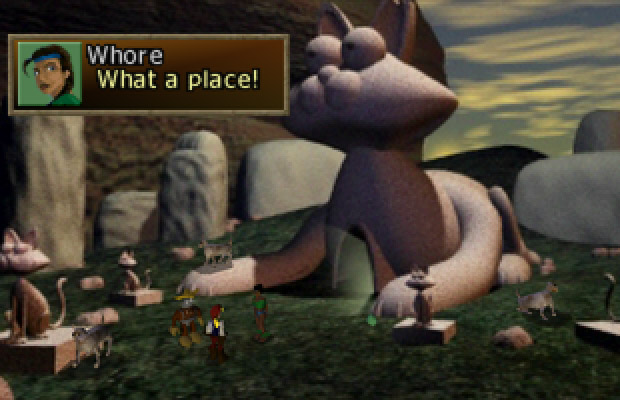 Screenshot courtesy of MobyGames, whose contributors are classy and intellectual folks.

The circumstances of Shadow Madness’ birth made for an inevitably odd creation. The people behind it were Square expats, left alone in the cold and dark when the company shut down its Washington development branch after a single game (Secret of Evermore). Evermore had its issues, but it also had its moments! Certainly it wasn’t so terrible as to necessitate shutting down the entire studio behind its creation. Nevertheless, Square axed that arm, and from what I understand a bunch of its crew established a company called Big Rain, which then metamorphosed into Crave’s Craveyard studio, which created Shadow Madness, which was one of the PS1’s many games that really, really wanted to be Final Fantasy VII.

I don’t remember it being great, but I certainly found it a lot more tolerable than peers like Legend of Dragoon and Zill’Oll. Something tells me we’re pretty unlikely to see Shadow Madness on PSN anytime soon, so I went ahead and picked up a cheap copy in physical media. Who knows when I’ll actually have time to revisit it, but it should be an interesting experience. I suspect it’s probably not a game to whom the past 12 years have been particularly kind… but stranger things have happened. Right, Whore?