So today I learned that Mr. Mowery isn’t the only Talking Time regular who likes to make Mario-style platformers. Apparently there’s a whole slew of ’em. 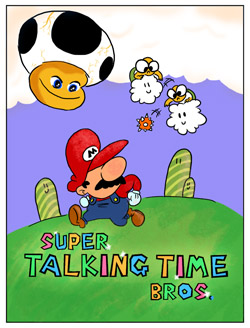 The project in question is entitled Super Talking Time Bros. And yes, apparently it actually does have a poison mushroom bearing Percy’s face. This guy are sick.

STTB is a collective venture built on the Super Mario Bros. X homebrew platform, which is why it’s news to me: I haven’t been following the thread where everyone’s collaborating because the SMBX app doesn’t run on Macs and I haven’t been able to install Windows on my MacBook yet (long story). Pity, because it looks pretty good!

Unlike the vast majority of ROMhack-style projects, STTB has tremendous potential simply because the ground rules explicitly forbade people from creating your typical impossible ROMhack challenges built around the exploitation of bugs and advanced techniques. The idea is to make a fun, accessible, universally enjoyable game built on the same foundations of good level design you’d see in an actual Mario game. I can get behind that. There’s charm in Kaizo-style extreme challenge, but for most people (including me) they’re only fun when watched on YouTube. This aspires to be a fun game for everyone.

Anyway, you can download it at the link above and find more information about it at the relevant wiki. Let me know if it’s good, while I look on longingly.

5 thoughts on “By request”