Tactics Ogre: Japan still gets all the good stuff

Pardon the awkward site layout for the moment; the site is currently making the transition between old and new backends. If you happen to be awesome at XML and CSS, please let me know. Because I could sure use some help customizing this nonsense.

You should update your RSS feed, by the way. The old one is about to become very inactive. 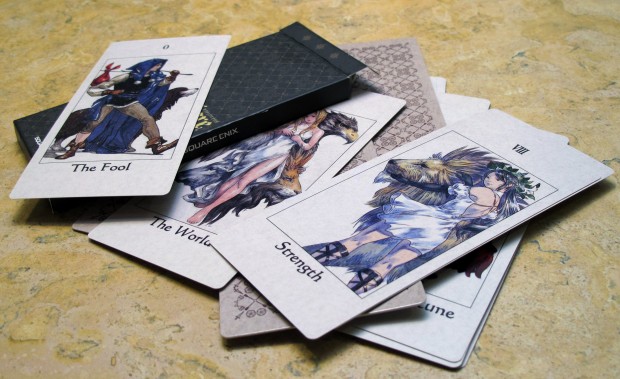 Some Square Enix reps dropped by the office the other day to give me my first look at the English version of Tactics Ogre, and it was as great as I expected. The game looks to recapture the depth and intricacy of the original minus the terrible load times of the PlayStation version (attack-pause-load-pause-ARGH) or the awful need for relentless grinding before each new battle. (Random battles have been added to the world map, FF Tactics-style, so no more training mode.)

I didn’t get to play the game myself since it’s still in that early state where the publishers are afraid to let civilians touch it for fear that it will explode and kill everyone, or whatever. But they made up for it by leaving a few sets of the Japanese preorder bonus: Tactics Ogre tarot cards.

These things are wonderful. The Ogre series has always incorporated Tarot arcana into its narrative — the Japanese subtitle for the remake is Wheel of Fortune, after all — and this version is no different. It begins with a personality quiz based around Tarot cards, and each suite has been newly illustrated by Akihiko Yoshida. The preorder bonus cards are in fact these exact illustrations printed up on glossy card stock. That makes them one of the best bonuses ever.

Unfortunately, Square hasn’t announced any intent to include these for the U.S. release, and that is a darned shame. My advice to you is to contact them and ask — nay, demand — your very own set of Yoshida-illustrated Tarot cards for preordering the game. Bonus points if you make allusions to death and hanged men.

39 thoughts on “Tactics Ogre: Japan still gets all the good stuff”