I am not clarifying my Other M review

Because I didn’t write a review, remember? However, I feel like a few statements in my not-a-review of the game merit a little more explanation. So let’s do that, shall we? (I meant to write this yesterday, but the past 36 hours have been kind of crappy and stressful.)

First, I referred to Super Metroid as “a game whose success was a fleeting stroke of good luck,” which rankled a couple of people who didn’t understand what I meant. Which is this: Super Metroid is one of those games that was a product of its time and technology, and its impact was especially potent for its good fortune in arriving when it did. It possessed a subtly and sophistication lacking in other games of the day. Super Metroid would have been a great game even five years later, but in 1994 it was a towering achievement. That’s all.

More deserving of explanation and reconsideration is this comment: “Other M’s plot bits come off with that awkward quality of early PlayStation games, because that’s precisely where Nintendo is in terms of narrative design: where everyone else was 15 years ago.”

I need to retract that statement, at least in part, because it disparages Nintendo as a whole when I was really remarking on a very specific facet of the company. Internally developed Nintendo games rarely focus on narrative, and outside of Other M the only place you’ll find story-heavy first party Nintendo titles is under the auspices of Intelligent Systems (Fire Emblem, Advance Wars, Paper Mario, etc.). Yes, there have been a few exceptions through the years — I’m thinking primarily of the Famicom Tantei Club series and EarthBound — but those titles were very much genre pieces (adventure and RPG, respectively). 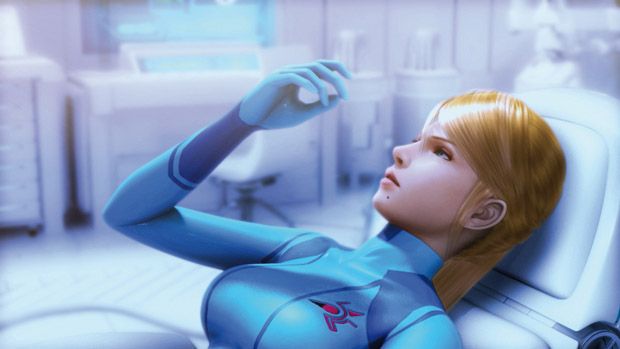 Other M is unusual in that it’s the company’s first real attempt to develop (or co-develop, anyway) a narrative-heavy game brimming with real-ime cutscenes and CG and dialogue and even touches of in-game narrative. Nintendo just doesn’t make games like that; even Zelda games rarely have more than a couple of minutes of dialogue at a time, and those are never fully voiced. Other M is Nintendo venturing into new territory… and, perhaps not surprisingly, they’ve fumbled their first attempt. A lot of people are pointing the finger of blame at the company’s choice of partners, and in truth some of Other M’s more egregious quirks do demonstrate a suspicious trace of Team Ninja’s fingerprints. On the other hand, Samus doesn’t demonstrate any pneumatic chest-jiggle that I’ve noticed, so you have to admire the presence of at least that level of restraint.

Really, though, I think the bigger problem with Other M is just that Nintendo’s veteran staff doesn’t have much experience with this sort of storytelling. They’ve always subsisted on a more minimalist approach to conveying plot, and the company’s narrative style hasn’t really evolved much beyond the 16-bit approach of text boxes and pantomime. And that’s been fine, for the most part; their games’ stories have been sufficient to get the job done, and the localizations are always a step or three above average. Other M ventures beyond the 16-bit style to attempt presenting its game in the fashion of mid-’90s FMV-heavy games… and that’s exactly how it comes off, but not in a good way. It’s stilted, awkward, and painfully Japanese in the worst way, what with all its heavy-handed symbolism and dialogue that circuitously skirts around important backstory details that all the characters know so those common facts can be doled out to the player at the director’s discretion. I guess you’d call it “contrived withholding.” I’d put Other M’s presentation about a half-step ahead of the original Resident Evil‘s. Which makes sense, because like I said, Nintendo’s forays into this space put them about where everyone else was 15 years ago. 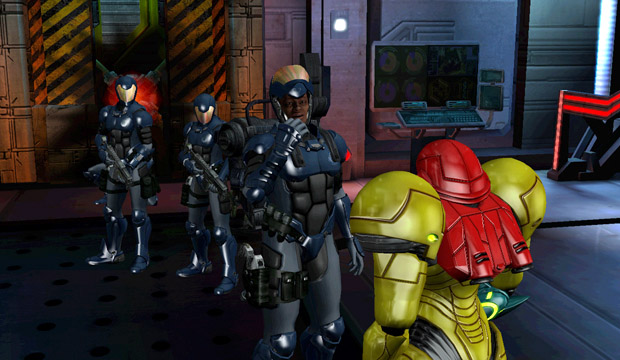 “I also hope that’s not Chris’ blood….”
I just hope the push-back they’re seeing from fans will encourage them to push ahead and refine their efforts rather than simply retreat into the comfortable familiarity of the 16-bit style. Nintendo has a lengthy history of innovation, and I think they could do amazing things with modern in-game narrative, just as Super Metroid did in its time. Here’s where were invoke another Japanese storytelling trope: the one where those of us on the sidelines clench our fists and think vigorously about how much we believe in Nintendo as speed lines zoom behind us. Ganbare, Nintendo Software Planning & Development division! We believe in you!!

Anyway, blah blah blah. I wish Other M weren’t so annoyingly intrusive with its once-per-hour mandated quota of crappy story, but the action is really impressive. I hope everyone has had a chance to give it a fair shake and judge the final results for themselves… which, really, was the ultimate point of my previous post. Whether you like the game or not, it’s always best to sort that decision out for yourself.

Uh, not to say we reviewers are superfluous or anything! Ha ha. Sigh.

27 thoughts on “I am not clarifying my Other M review”