More of harmony, less of despair

So, I ended up liking Castlevania: Harmony of Despair, despite the fact that it’s pretty friggin’ weird. I still haven’t had a chance to play it with a full crew of six people, though, and I’ll be out of town for the next week — right during the peak “OMG guys let’s play let’s play” season for the game. Oh well. Hopefully people will enjoy it enough to keep playing beyond that first week. 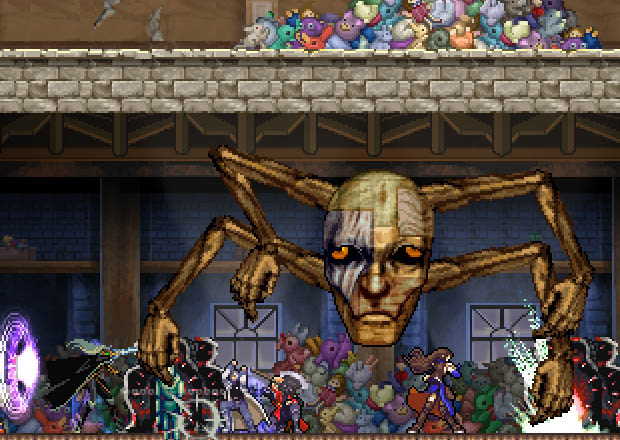 I’m surprised by how positively the game has reviewed so far; by and large, people seem to share my opinion. The two strongly dissenting reviews I’ve seen mostly focus on how difficult the single-player game is, which is… well, I guess it’s a fair complaint, but I think it’s one that could have been avoided if the game had done a better job (or in fact any job) of giving you some basic information about character balance and general mechanics up-front. People who pick Alucard or Shanoa will have much easier going than people who go with Jonathan or Charlotte — although the leaderboards are dominated by Alucard and Jonathan players, which I take to mean not that Jonathan is great but just that people like the familiarity of a whip-wielder and are willing to suffer through a lot of pain to get that Belmont-esque experience.

Anyway. As I mentioned in the review, the game’s saving grace is that you keep your loot and level-ups even if you die. I also like that the bosses also have very distinct patterns and tricks, and blundering into their lairs unprepared is a good way to die. Even though I’ve fought these bosses before, I never found them especially remarkable — novel, sometimes, but rarely requiring any kind of strategy. You’ll have to take on most of them a few times to get a feel for their abilities and powers, which really does give Harmony a classic Castlevania feel; once you get the hang of the fights, they’re pretty simple. The bosses have been remixed to make them much more interesting, and every single boss can be approached different ways; for instance, a solo player will probably want to clear out the chambers beneath Gergoth before the fight, while a group of players can be more direct in their confrontation.

You will notice I didn’t mention price in my review, because I never mention price in my reviews except to say, “This is a great deal.” I prefer not to think of games as commodities, and I refuse to evaluate fun in terms of dollars. Money is a tight resource for me these days, but time is even more precious; if a game is entertaining enough to make me want to spend my fleeting free time on it, then it’s surely worth whatever dollars the publisher is asking for in return. In short, cost should be regarded as a secondary consideration to real value, not the determining factor thereof.

Here’s a secret between you and me: Any time I see a reviewer dismiss a game because of its price — especially if length is the primary issue cited — I make a silent mental note never to pay attention to that person’s opinions again. (OK, so that’s a bit of an exaggeration. But I do ignore that review.)

28 thoughts on “More of harmony, less of despair”