So hey kids, you’re running out to buy a copy of Dragon Quest IX today, right? You’d danged well better be, because it’s the single best original RPG ever made for the DS, slightly edging out Etrian Odyssey and The World Ends With You — although I will admit that my appreciation for DQIX stems from the same love for free-form exploration and skill-building (in which story is largely incidental) that drives my Etrian fandom. Those who are into the whole RPG thing for a dramatic Final Fantasy-style epic tale should be warned that DQIX may leave them cold.

For my money, though, DQIX gets down more to the fundamentals of what RPGs are really about than the vast majority of efforts flowing from Japan these days. And from the west, now that I think about it. Which makes me frustrated, once again, that I pretty much missed out on all RPGs prior to Nintendo’s release of the original Dragon Warrior in 1989… through no fault or disinterest of my own. 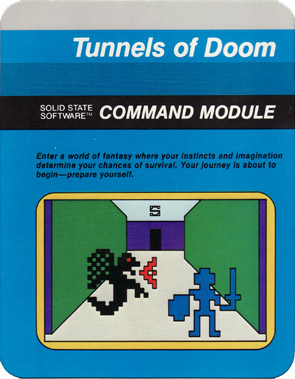 My first real introduction to RPGs, so far as I can recall, came one night when I was about 7 and my family went to the next town over to have dinner with some friends of my parents. Their oldest son (who was maybe five years older than me) was sitting at his family’s TI/99-4A, moving slowly through a 3D maze and occasionally switching over to fight sketchily rendered monsters in a top-down view. It looked kind of amazing — much slower than the arcade games I was used to, but also richer in content. I watched for a few minutes before he had to shut down for supper.

I never did see that game again. Despite the proliferation of 99-4As in the Lubbock school system, that early ’80s Dungeons & Dragons panic that people joke about was alive and well in West Texas; on more than one occasion my church youth group was dragged next door to the auditorium at the local Christian college to hear a police detective lecture about the evils of D&D. It was hard enough to convince teachers that we totally needed games for the classroom’s TI, but a game clearly based on Satan’s own tabletop game? Fuhgeddaboutit. And the only computer my family had prior to around 1992 or so was a Coleco ADAM, which was sadly RPG-deficient. So I had to make do with Dragon Warrior. Ah, but what might have been.

Eventually I deduced that RPG I saw so fleetingly was Tunnels of Doom, another bit of techno-wizardry on the 99-4A: It somehow managed to create faux 3D Wizardry-style corridors on the system’s character-based display, which is sort of like serving up a Benihana feast using only a toaster. I don’t think I’d really have the stomach to play the original game these days, though, but I don’t have to: Some kind soul has been gracious enough to create a Java-based remake of Tunnels of Doom. Maybe this would be the perfect time to go back to the beginning and discover the RPG experience I might have enjoyed under different circumstances.

Just as soon as I complete all the post-game content from DQIX. And play through Etrian Odyssey III. And finally play Persona 3. And… hmmm. Come to think of it, maybe it’s best to leave that alternate timeline in a Schrödinger-approved quantum state.

EPILOGUE: Apparently that D&D-fearing detective ended up becoming mayor pro tem a few years ago. In someone’s mind, I’m sure that means the good guys won.