I’ve been in full-bore GameSpite Quarterly writing mode this weekend, outside of those times wherein I’ve been doing, you know, legitimate work. The new issue is coming along quite nicely, although I’m having trouble figuring out how we’re going to cram all of this NES 25th anniversary nostalgia into a single book. Blurb’s format tops out at 420 pages, I think. That just might not be enough….

Anyway, trying to figure out the NES’s place in history has set me to thinking about systems that predated it. No matter how hard I try, I can’t seem to dislodge my conviction that the NES was gaming’s pupal form, the system which ushered in a maturation from simple single-screen arcade games to incredibly deep adventures. Of course, depth in gaming certainly predated the NES! What made the NES important is the way it unified that depth with refined graphic design and streamlined interfaces.

That being said, I did spend my formative years in Lubbock, Texas, and that means I have an everlasting soft spot for Texas Instruments’ bid to dominate home computing: The TI-99/4A. 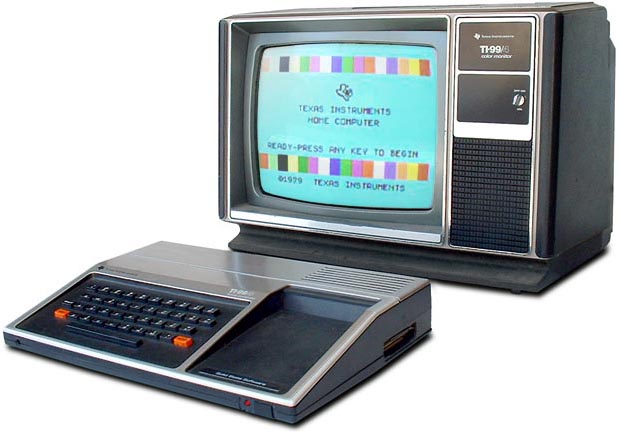 The 99-4/A was one of a succession of microcomputers from TI, but honestly I know very little about its precursors. They never seemed to make the rounds. The TI-99/4A, on the other hand, was absolutely ubiquitous. Or rather, it was ubiquitous in Lubbock, because TI had a huge manufacturing plant there. I’m pretty sure they cut the Lubbock Independent School District some sort of crazy deal in an attempt to create community goodwill (or maybe just to net themselves a tax break). By 1984, it seems like every classroom in the city had a TI-99/4A. Of course, by 1984 I’m pretty sure TI had pulled out of the market altogether, so maybe we were just getting remaindered goods. Whatever!

The important thing is that we had computers. We could write BASIC programs on them. We could also play videogames. The latter was, admittedly, a lot more exciting than the former, though our teachers didn’t seem to share our enthusiasm. 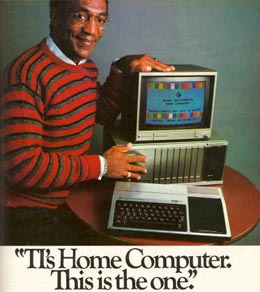 Like most computers of the era, the TI-99/4A’s library hovered in a nebulous grey era of integrity. Most of its games seemed curiously familiar to anyone who spent time in the arcades, though the serial numbers had been filed down for the sake of plausible deniability. I mean, surely any similarity between shooting game TI Invaders and Taito’s Space Invaders was just coincidence, right? And the maze-chase adventure Munch Man — nothing at all like Pac-Man, and how dare you suggest otherwise!

We didn’t care about the shifty software, of course. We just wanted to play some danged videogames with what should have been learning time. Also, Bill Cosby said the 99/4A was “the one,” and who were we to argue with the vaguely prophetic proclamations of the man who brought us Jell-O Pudding Pops?

Later in life, I learned that the 99/4A was the first consumer-level 16-bit microcomputer, and that it shared common tech with gaming standards like the MSX and ColecoVision. So that’s interesting and all. But I’ve never met many people who’ve shared my own experience with the computer, leading me to believe that it was ultimately a fairly localized phenomenon. Heck, I even attended a morning camp one summer where kids went to learn to program the 99/4A; my project was to have the computer render a drawing of the Tron logo and a light cycle, because, well, I was born a nerd. But that’s probably a given now that I’ve revealed that I was excited about waking up at 7 a.m. to attend BASIC programming classes for a few weeks one summer.

I have to admit that I’ve never really regarded growing up in Lubbock as having been a prime opportunity for a cutting-edge technological experiences… but I suppose stranger things have happened than what I lived in that curiously specific period of time between 1981-1984.

24 thoughts on “Instrumental in Texas”