Some perspective on the 3DS

Has it really been six years since Nintendo debuted the DS hardware at E3 to a hesitant press and grim forebodings? How far we’ve come. The 3DS’s public debut last week at E3 was a far cry from its predecessor’s first showing back at my very first E3. The new machine is a slick, solid piece of gaming hardware that wowed everyone. Seriously, I don’t know a single person who wasn’t impressed, and most of those people don’t even like handheld gaming. Compared to the E3 2004 prototype DS, a sorry-looking piece of cheap plastic whose value was difficult to communicate, the 3DS might as well be from a different company altogether.

I took a little time to photograph my favorite version of the 3DS, the glossy orange one. This color is much too classy for Nintendo of America to actually release here, so I wanted to capture evidence that it did exist once we’re given our generous choice of black and electric blue. 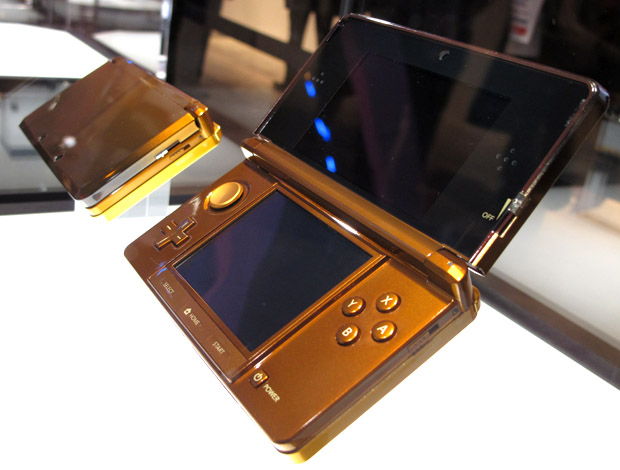 It’s heartening to see so many people — i.e., pretty much everyone — enthralled by the 3DS. It’s like a vindication of handheld gaming, almost. Maybe American gamers will actually take it seriously now! On the other hand, the only other time in history that press and industry folks have seemed unanimously positive about a portable console was back at the PSP launch, and well all know how that turned out. Nintendo’s made a good first impression, but the company’s been riding on top of the world for a while. If they slip, it’s a long and painful tumble down to the bottom.

So, let’s manage our expectations for the 3DS, shall we? It’s cool, it’s powerful, and it offers something new and exciting, yes. But the 3DS isn’t perfect, and it’s probably not a bad idea to take a tally of the complaints we’re going to see about the system once it’s actually out in the wild and in gamers’ hands. Avowed wet blankets can prep for their parade-raining attacks now; determined fanboys can start fortifying their bulwarks. This is a small public service I like to provide.

This will, of course, be a matter of debate, because for some people the illusion of depth is intrinsically a value-added proposition. Beyond the cool factor — which, admittedly, has done a damn fine job of selling even staunch cynics on the machine — it’s hard to imagine 3D visualization having a material impact on gameplay. Even if it could, I don’t know that it can realistically happen when there’s a depth slider on the side of the hardware to turn the effect off, meaning that games will have to work both with and without 3D. Add to that the fact that Nintendo has already said the 3D effect shouldn’t be used by kids under seven since it will make them go blind as their brains explode or whatever and ultimately what you have is a very fancy graphical embellishment and nothing more. That will be more than enough for many gamers, but I bet there’ll be quite a few people who want something a little more substantial from their new tech.

I approached the 3DS with great skepticism, because my awful eye problems (I’m a recovered amblyopic, and I have one farsighted eye and one nearsighted) make 3D effects extremely difficult for me to visualize. I’ve seen just one 3D film in the theatres so far, and it left me with a serious headache. My first impression of the 3DS was extremely positive, because it worked for me without a problem. But later I realized that first demo was a sort of “optimal situation” sort of deal, looking at a lot of still images. Once I tried some hands-on demos on the show floor, I found the 3D to be hit-and-miss. Once objects are in motion, my eyes strain a bit to make sense of the depth, and in some cases I can barely see the 3D at all. Our friend John Ricciardi had even worse luck; he wasn’t able to see the 3D even in those optimal demos. I still find 3DS a lot more pleasant to look at than everyone else’s 3D fakery, since it doesn’t make everything look dark and washed out like those stupid glasses do, but I foresee myself turning that depth slider down fairly often.

3. The screen has a terrible, terrible angle of viewing

The elephant in the room, and the reason Nintendo was adamant that no one film 3DS games directly off the screen. This is going to be the system’s make-or-break issue. The trick to the 3DS’s visualization technology is that it (apparently) layers two screens one on top of the other. When you look at it straight-on, it looks like 3D! But tilt the machine even just a couple of degrees from dead-on and suddenly the illusion shatters and what you see is two ghost images rather than a single unified “solid.” Look at it from a side-on, over-the-shoulder perspective and it’s even worse. In a sense, the 3DS is the conceptual opposite of the DSi XL; the latter was purportedly designed to be a system that encourages people to gather round a single system and watch, but try doing that with the former and everyone’s going to see something very ugly unless the depth slider is set to “off.” More crucially, though, the 3DS’s visual effect can break even for the person using the system if they don’t hold it very, very carefully. I found that the natural movement of my hands and head during a fast-paced action game like Starfox 64 caused the system to move out of alignment for me. I wonder what impact this will have for long-term play; if you have to hold the system very carefully at a precise angle, it’s going to become very tiring very quickly… to say nothing of the fact that the games which stand to benefit most from 3D visualization are the ones most likely to cause you to get you into the action and let your angle of viewing drift.

4. Hey wait, it’s pretty much just a DS whose top screen has been replaced by a PSP

There’s already a lot of debate about just how powerful the 3DS really is. My first impression was PSP quality… and then I saw Kid Icarus Uprising and Metal Gear Solid 3D in action and upgraded my opinion to “maybe even Wii level!” Later, I gave it some more thought and realized that the graphics seem to lack any sort of antialiasing, and that by and large the polygon models I’ve seen so far are roughly on par with PS2 at best. Ultimately I decided that it’s stupid to fuss about direct comparisons, because it’s kind of pointless; the only important question is whether or not games look great on the built-in screens, which they do. Still, the best way to explain the 3DS in terms of horsepower is that Nintendo basically added a DS’s touch screen beneath a PSP — heck, even the button layout is practically identical to a PSP’s, except that the analog nub and D-pad have been swapped around. That’s fine by me if it means we get games on par with Metal Gear Solid: Peace Walker, but I wonder if it will fly with HD addicts once the 3D honeymoon is over?

5. All the colors Nintendo will release in North America are gonna suck.

I know. It is always thus. But at least we have our memories: 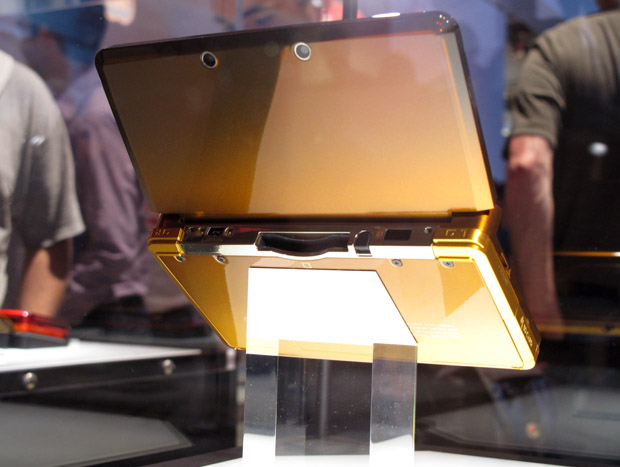 Let me stress again that this is not a post hating on the 3DS. You know me — I love playing portable games much more than sitting in front of a TV. Handhelds are intimate, personal, and offer way more flexibility. I’ve always been 1UP’s biggest advocate of portable gaming; I even gave the DS a fair shake back when it was widely regarded as a crappy last-ditch effort to compete with PSP. I’m absolutely excited for 3DS and the prospect of playing all the DS’s best games (and new ones) with better visuals and built-in communications features. That being said, the sheer adulation being heaped on 3DS after E3 is probably setting expectations for the system a little too high. It’s not going to change the world or anything, and it’s hardly without its drawbacks. Consider this a dose of measured enthusiasm from a fan. 3DS is gonna be great… just don’t expect it to be handheld Jesus come to rapture you away to gaming heaven or anything.

34 thoughts on “Some perspective on the 3DS”