I browse a lot of forums in the course of my working day, so when I commented on Dragon Quest IX‘s localization and reactions to it last week, I was intrigued by the way number of people in various corners of the Internet assumed my criticism about what I see as short-sighted complaints about the way DQIX is being handled was specifically directed at them, when in fact it was just kind of a general response to a widespread dislike of the way Dragon Quest games are adapted into English.

(Convoluted as that last sentence was, I have probably disqualified myself from any commentary on the English language, but whatever.) 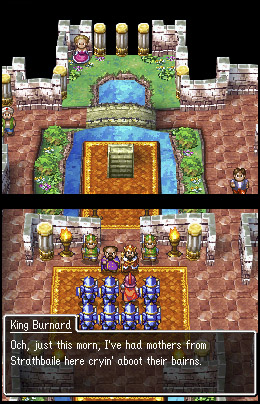 The fact of the matter is that Dragon Quest localization is a fairly divisive topic. It’s not exactly one of the hot issues of modern life, but any forum featuring a fair amount of discussion on the series is bound to see a few dissenters who really and truly detest how Plus Alpha handles the series, with all their over-the-top dialects and extremely British-flavored (er, flavoured) text. And fair enough. Dragon Quest’s English dialogue is pretty wildly different from, well, every other videogame series that I’m aware of. For me, that’s a big part of the charm — god knows there are more than enough games out there whose scripts were penned by people who either don’t know how to convey anything akin to personality or simply don’t care to bother — but I can see where some might find it off-putting. And yeah, a couple of those dialects in Dragon Quest IV bordered on the grating.

Still, I think that the wanton abuse of idiom and idiosyncrasy are a perfect complement to the games, especially taken within the context of its character and history. There are some complaints that the English localizations aren’t faithful to the original Japanese scripts, which I tend to regard as a depressing po-faced sort of gripe. Not that I ever do any localization work myself, but if I did, I would definitely favor the tenets laid down by Saint Ted lo those many years ago: It’s important to be true to the source material, but never forget to give your target audience something interesting to read. A literal translation and an effective localization are rarely the same thing.

In the case of Dragon Quest games, while it’s true that the original Japanese tends not to be quite so flamboyant as the modern English adaptations, it’s also true that their dialogue is shaded with subtleties that aren’t entirely possible in other languages. More importantly, though, Dragon Quest games don’t take themselves completely seriously. Not to say they’re devoid of drama, because that would be a patently ridiculous claim. But bear in mind that this is a franchise whose most iconic image is of a grinning blue slime; a franchise in which you can pay a pittance of coins so that you can close your eyes and have girls in bunny costumes squoosh their breasts against your face; a franchise that includes a combat class whose most tactics include telling a “naff gag” that debilitates the bad guys with laughter for a round or two (although sometimes it doesn’t work, when the enemies don’t get the joke). In other words, despite the epic drama and heartbreaking vignettes, it’s hasn’t exactly crawled up its own arse with self-importance.

The closest analog to Dragon Quest that comes to my mind is the manga of Osamu Tezuka, which is perfectly appropriate. Both stand as medium-defining works in Japan, yet neither has done especially well in the U.S. And both demonstrate the ability to make wild tonal swings between deathly serious and farcical slapstick… sometimes in a single panel, in Tezuka’s case. The Dragon Quest games are the farthest thing from your typical stuffy RPG fodder, and the dialogue we see these days reflects that a lot better than the clunky semi-Shakespearean material that was foisted upon us in the NES days.

So anyway, the point is I’m really looking forward to Dragon Quest IX, and stuff. But I guess you knew that already. The end.