The love slaves of Route 34 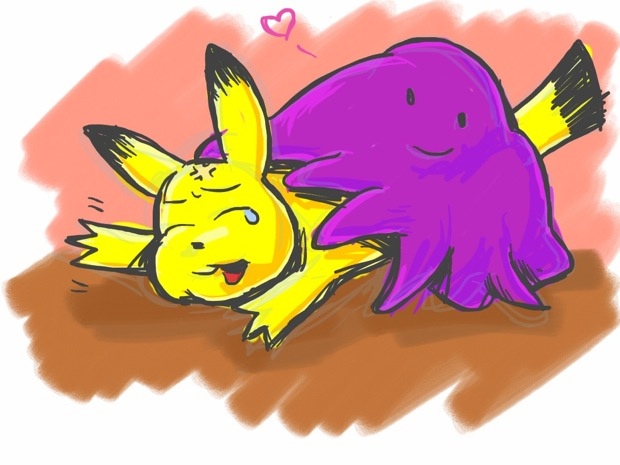 I think I am slowly, slowly finding my virtual finger painting mojo. But man, I would kill for a good stylus.

It seems that drawing inappropriate Pokémon pictures on public transit has become the raison d’être for this here iPad thing, and so I present to you my latest, um, masterpiece. Fortunately I had an empty row on the plane last night, so no one called an air marshal on me for this one.

The interesting thing about these games is just how open they are to different approaches. For instance, my ATB collaborator Kat mainly sees Pokémon as a vehicle for proving her superiority by humbling others in combat. Others live to catalog the utter minutiae of the franchise, or to break the games as brutally as possible through ruthless exploitation of programming oversights. And myself? I just like collecting. I don’t collect games anymore, but no one said I couldn’t collect things within games.

These are the loopholes by which we live our lives.

A little while ago I caught the infamous Ditto, a fairly worthless little creature that I named Limbaugh. Because it is a fat blob called “Ditto,” you see. The one interesting thing about Ditto, of course, is that it transcends mere polyamory and will happily procreate with very nearly any creature you send it to the Route 34 day care center with. I’m not sure how the other creatures feel about that, but if they want to complain I am afraid they’ll need to learn to express themselves more effectively than by simply repeating their own names over and over again. So now I have an army of valuable trade fodder for the GTS, all named appropriately (i.e., a Chikorita named “Swap Thing”). I’m gonna fill that index, or at least die lose interest trying.

Of course, pokémon don’t have to use Ditto for reproduction, but at this point I can’t remember which critters were caught and which were spawned by an overly friendly purple blob, and I don’t want to run the risk of pairing a beastie with it’s own parent. You gotta have some standards here, folks.