Pokemon Green, as in Soylent

I took a week off from HeartGold so I could try out the import version of Etrian Odyssey III. What I discovered in that time is that EOIII is different from the first two games, though similar enough that I can really do some damage to myself through cockiness. So, now I’m back to HeartGold to wait for a version of EOIII in which I better understand how to make proper use of the enigmatic skills of the Pirate and Farmer classes; the import version will be kept in reserve here at the office in the unsavory event that Atlus decides to defy logic and money and not bring it to the U.S. 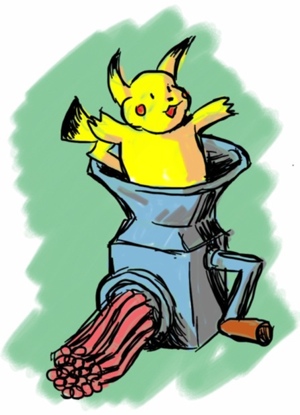 As for HeartGold, I’m very nearly through the “main” game, needing only to slog through a ridiculous last-minute instance of being jerked around by game logic before I can claim that eighth badge. I’ve decided to let my compulsion for collection shine through by pursing as large a collection of critters as possible. This aim has been greatly abetted by the advent of the Pokéwalker, which has saved me a tremendous amount of effort in acquiring pocket monsters; all I need to do is walk around town and press a few buttons and, hey, new entries in my bestiary. Since I walk a lot anyway, this is hardly what you’d call a terrible onus.

The downside to this, unfortunately, is that my PC boxes are crammed full of completely useless extra pokémon I’ve accumulated in this manner. For every rare Kangaskhan to wander into my sights, I have about a dozen Ghastlies. I suppose I could just let them go, but that seems to fly counter to the entire purpose of the series, which is a naked celebration of acquisitive materialism. Simply abandoning a possession, even a needless one that I came to own with nearly zero effort on my part, is anathema to the Pokémon spirit. It’s a shame the series is so darned sanitary and kid-friendly. I’d love to be able to turn my extra monsters into items — toss ’em through the meat grinder to concoct a delicious pokésnack, for instance.

I guess I’ll settle for putting them up for grabs on the Global Trade Station to be traded by some bored Japanese kid eager to fill his game with the American equivalents of his beloved creatures. You may scoff, but some dude gave me their high-level Japanese Dragonite in return for one of my surplus captives, which went a long way toward easing the annoyance factor of that last gym. God bless people who are even more obsessive-compulsive than I am.

13 thoughts on “Pokemon Green, as in Soylent”