How was the earth conceived?

I’m not really terribly excited about Platinum and Sega’s new RPG-ish space thing, Infinite Space, but the sheer ubiquity of its title over the past few days finally convinced me to go ahead and buy a copy of Emerson Lake & Palmer’s Tarkus from iTunes. Why? Because Tarkus features a song called “Infinite Space,” of course.

Actually, “Infinite Space” is pretty much the album Tarkus in a nutshell: The work of a bunch of intellectual kids in their early 20s who just realized, hey guys, that whole “religion” thing is pretty dumb, huh? Lyrically, it’s slightly less hamfisted in making its point than ’70s-vintage Neil Peart, but demonstrates far less grace than its contemporary Aqualung. At least Jethro Tull had the decency not to take themselves entirely seriously. “Infinite Space” features deep gems like “Do you believe/God makes you breathe?/Why did he lose/Six million Jews?” delivered straight-face by a falsetto Greg Lake. It’s awesome. Awesomely bad. Charming in its pompous little way, though.

Tarkus‘s title cut is pretty amazing, though: It’s a 20-minute rock epic about a mighty armadillo tank that, so far as I can tell, declares war on the Catholic church. 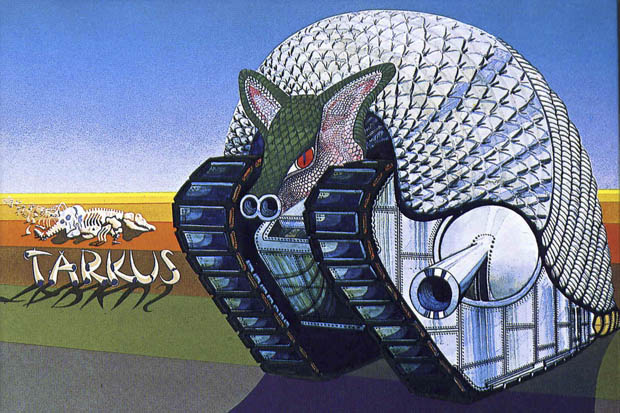 I mean, come on. How could this be anything less than a masterpiece?

Despite its somewhat unconventional length, structure, and style, not to mention its relatively slow time signature — or perhaps because of these things — it’s one of the most intense songs I’ve ever heard. I remember listening to it once in college; when it was over, a friend of mine whose tastes tended toward speed metal and other loud, angry music asked, quietly, “Can we listen to something else? That was way too oppressive.” I guess it must have something to do with the leaden weight of the sound, which is predominantly bass guitar, Hammond organ, and shrieking Moog.

As for Infinite Space the game, well… I like the variety of customization and such, but it all seems like an awful lot of trouble to go to in order to play rock-paper-scissors. Plus, I’m pretty sure Tarkus would whup any one of the game’s spaceships in combat.

11 thoughts on “How was the earth conceived?”