I am watching television

That’s noteworthy, because I never watch TV! Well, not of my own volition. I love my fiancée enough that I don’t leave the room when she decides it’s time to watch Desperate Housewives or Sex and the City, but lately I’ve been electing to watch How I Met Your Mother, because it’s amusing without being trashy and dumbed down like pretty much every other sitcom on television, and Lost, because it’s really quite interesting. It’s a solid mix-of sci-fi and character drama, with both elements ending up in very different places than where they began. 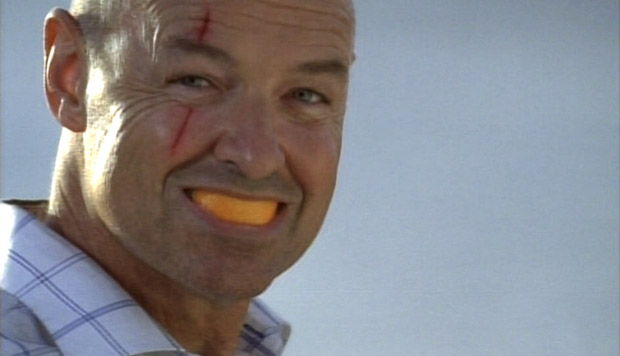 For instance, in retrospect, this scene is really kind of weird.

Anyway, I’ve discovered that the best way to deal with lengthy, serialized series like Lost is to pretend they don’t exist until their final season, and then catch up all at once. (Netflix is an invaluable tool for assisting with such an endeavor.) Taking the last-minute compressed approach helped me survive the later seasons of Alias, and it came in just as handily during the third season of Lost, which frankly I don’t even remember. There was a third season, right?

Unfortunately, Cat and I misjudged our Lost endeavor. We caught up to Alias about two episodes before the finale, but with Lost we still have like ten episodes to go. Going from five seasons in three weeks’ time, never having to wonder where the plot was heading, to waiting a week between episodes is a painful transition. However, I am making a sincere endeavor not to be one of those fans, the one who loudly speculates at length about his dopey, half-assed theories every Wednesday morning. If I fail, and you happen to pass within earshot, I apologize. The good news is that both shows I am watching are in their final seasons, so once we survive the spring I can go back to pretending TV doesn’t exist.

26 thoughts on “I am watching television”