You can buy GameSpite Quarterly 4 now 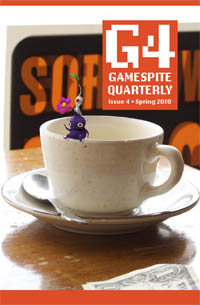 Ladies and gentlemen and frothing Internet user types, GameSpite Quarterly 4 is now available for your purchase. For your convenience, here is a direct link to the GSQ4 standard edition page ($13) as well as a link to the hardcover deluxe edition ($36).

I wasn’t planning to make the book available for another week, but then every pre-slim PlayStation 3 on the planet decided to take a simultaneous crap, which sort of mucked up my plan of spending the weekend reviewing Final Fantasy XIII. So, hey! Sony’s failure is your victory. Unless you own an old PS3 which no longer works, in which case, my sympathies. I was relatively fortunate in that I was working with a debug system when the death march kicked off, so my precious backward-compatible system was disconnected at the time. With luck, things will be patched up soon and I will still have a piece of hardware capable of playing PlayStation 2 games in progressive scan.

All of this has nothing whatsoever to do with the latest issue of our quarterly venture. Although the articles within do touch on many PS3 games! Despite the slightly retro bent of GameSpite as an entity, you’ll find this issue has far more to do with current-gen gaming than with older titles. I hope we can still be friends.

Please spread the word of this delightful new publication!

And of course, to help inaugurate the debut of GSQ4, here is the first posting for the issue’s online edition:

How RPGs Lost Their Way by Jake Alley
At first glance, this article may seem (according to the author’s own words) like a “damn kids get off my lawn” rant. But it’s actually an insightful treatise that scrutinizes the RPG genre and its tendency to cling to outmoded mechanics that no longer make any real sense. Oddly enough, it makes no direct to FFXIII, yet it’s done a lot to open my mind to the game’s slash-and-burn approach to design.

18 thoughts on “You can buy GameSpite Quarterly 4 now”