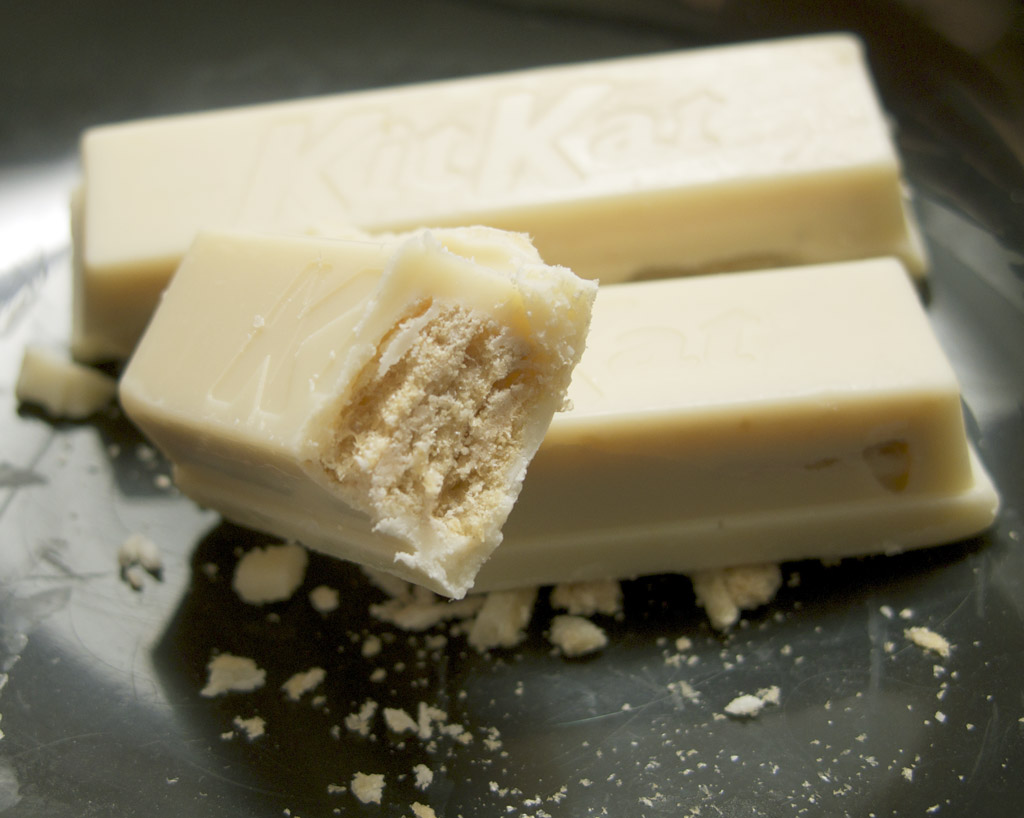 Warning: Do not dip sashimi into this candy. (Photo: Jeremy)

Welcome to the second episode of Kit-Kat Densetsu! Please note that for proper effect, you should shout “KITTO KYATTO DENSETSU!!” in a booming voice whenever you read one of these.

The flavor this time out is Shouyu, or soy sauce. This is one I was really curious to try, because the prospect of a soy sauce-flavored candy bar has tremendous potential to be incredibly rank. But it could also be very, very good; the Japanese excel at mixing sweet and savory. Teriyaki sauce is basically a mix of sugar and soy sauce, right? So you can see why I was intrigued by the notion of a soy sauce Kit-Kat.

Cat and I went all out for this shoot. We even put the bar in a shouyu saucer for maximum irony! Sadly, the reality of a shouyu Kit-Kat is rather… well, shall we say, undeserving of such efforts. If I didn’t see the word “shouyu” on the package, I’d never have guessed that this is supposed to taste like soy sauce. It’s not salty, nor is it savory. In fact, it’s cloyingly sweet.

When you open the wrapper of the candy, you’re hit with the overwhelming scent of maple, of all things. It smells like you could melt this thing down and drizzle it over pancakes and no one would be any wiser.

And then there’s the appearance. It’s white! Completely white. Soy sauce… isn’t white. I expected this to be made with white chocolate, sure, because someone at the International Kit-Kat Planning Bureau has the mistaken impression that white chocolate is good and as a result half the flavors I come across stray from the holy cause of milk chocolate. But even so, I figured the wafers and creme would be dark, to symbolize the sweetness of the chocolate around the saltiness of the interior. Alas, though; in the words of one M.D. Tannen: “You thought wrong, dude.” 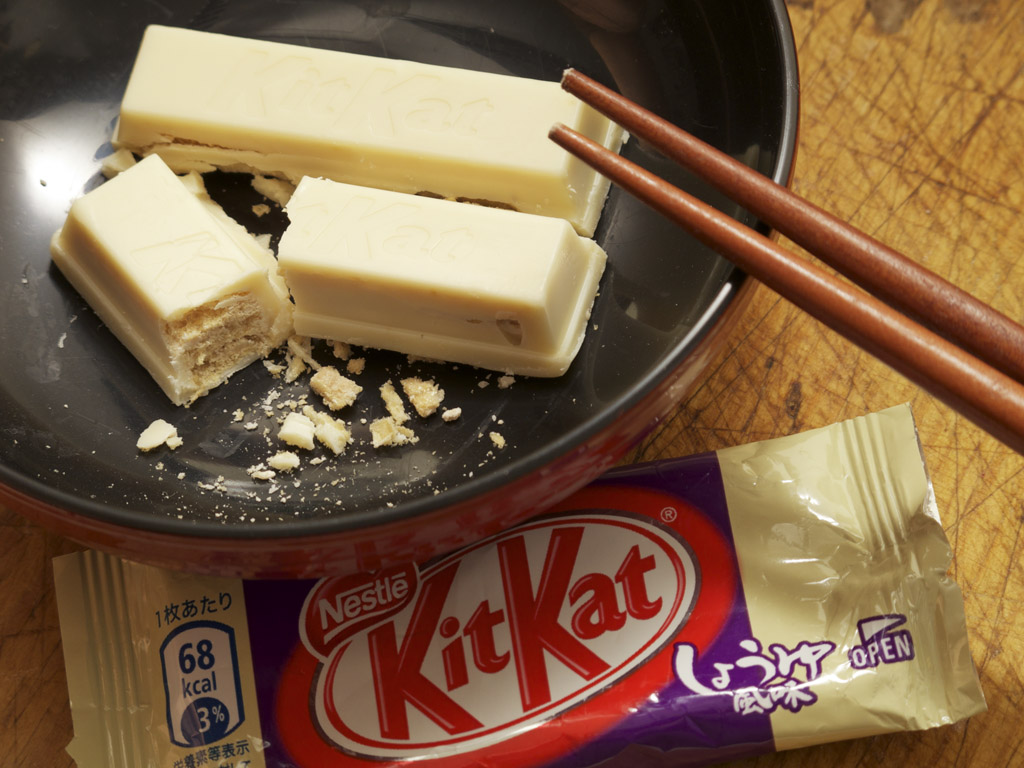 What about this wall of white says "soy sauce" to you? (Photo: Jeremy)

White chocolate is never as good as milk or dark chocolate because it lacks the bitter richness of cocoa, and I guess the same holds true of Kit-Kat wafers. The filling is more or less an extra-sweet version of the normal wafers and creme. There might be a slightly salty aftertaste, but I have a sneaking suspicion that’s a psychosomatic product of my imagination. It says “shouyu” on the package, so my brain tries desperately to invent a flavor to match. Shouyu Kit-Kat: It will make your neurons misfire!™

I’m definitely not imagining the overwhelming sweetness of this particular flavor, though. Cat remarked on the powerful maple smell — one tiny bar filled the kitchen with its aroma — and on its surprising lack of anything resembling soy sauce-like salinity. Interestingly, other Japanese Kit-Kat mini-bar flavors trumpet the fact that they’re 66 calories per serving, but this flavor is 68. I never realized you could cram so much sugar into two calories.

A little Internet research reveals that this is a limited-edition Kit-Kat sold only at the airport in Tokyo. I’m guessing it’s meant to be omiyage purchased by Japanese buyers as gifts for foreigners, because surely if someone from Japan ate one of these they’d call shenanigans on the distinctly not-soy-sauce-like flavor and the International Kit-Kat Planning Bureau would be forever disgraced.

Anyway, unlike Suppai Orange Kit-Kat, I don’t feel like we’re missing out with this one. White Kit-Kat is readily available here in the States, and I never buy it as it is. But if you’re ever in Tokyo and feel like gagging on the scent of pure, cloying sweetness, you know where to look.