Cat and I just finished watching Eat Drink Man Woman, and it was a beautiful movie. A beautiful story, filmed beautifully. But the most beautiful thing of all was the food! The glorious food. Classic Chinese cooking, prepared meticulously and elegantly by expert hands. And it reminded me, oh, hey, we have this food blog, huh? So, hey. Food blog.

Tonight, I’m getting back in the swing of things by launching a recurring feature called Kit Kat Densetsu. That’s “Kit Kat Legend” in Japanese, for those who don’t know Japanese terms that have become terribly generic through overuse in videogame parlance. The name fits, though, because this section is devoted entirely to the unique and exotic flavors of Kit Kat sold only in Japan. Yes, that’s right: The common, everyday Kit Kit, available in a pitiful three flavors here in America (plus a gross orange-colored white chocolate version at Halloween) exists in a cornocopia of flavors over in Japan. I make it a point to try every kind of Kit Kat I can find when I travel to Tokyo; some are unpleasant, like the “vegetable health drink” kind they were selling last fall. Some are utterly amazing, like the seasonal winter black tea bar I picked up two years ago at a convenience store at Inara. I’ve acquired more than a dozen different sample flavors, and at a needlessly high cost — but it’s all for the noble purpose of writing about the fascinating variants of Kit Kat sold in Japan. It’s funny, but my favorite Japanese mass-manufactured snack is actually an American candy bar. 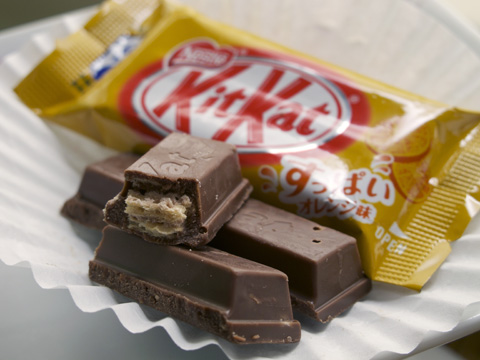 To inaugurate this section, we’re starting with the classic: Orange Kit Kit. Technically, this edition is “Suppai Orange,” or sour orange, but it tastes about the same as the Orange Kit Kat I fell in love with the first time I ever went to Japan. Interestingly, they actually did offer Orange Kit Kat here in the states in select regions for a limited time, but like other great ideas of the early 21st century (see also: Diet Pepsi Twist), it was deemed unfit for this world. Except in Japan, of course. I bought like three bags of these things at TGS last year, and distributed most of them to friends. That is because I play a Paragon in real life, not just in Mass Effect.

The Orange Kit Kat is precisely as it sounds: A Kit Kat bar infused with a strong orange flavor. As we all know, chocolate and orange are one of nature’s most perfect combinations. Kit Kats aren’t exactly gourmet chocolate, but they’re one of the few candy bars I enjoy — they’re not overly sweet, and the chocolate is a great complement to the crispy wafer interior. I wouldn’t eat a bar made of just Kit Kat calibre chocolate, and I wouldn’t eat the wafers alone. Together, though, they’re pretty good! But mix in the taste of orange and you’ve officially reached “day-yum!” territory.

The orange mixes well with the chocolate, but it overpowers the flavor of the wafer. That’s OK, though, because the wafer is really more about texture. The orange flavor teeters at the precipice of being too strong, but it’s actually just right. More importantly, it doesn’t leave an unpleasant chemical aftertaste like a lot of fruit-flavored candies. The bar tastes sweet as you eat it (Cat described it as tasting “like an orange creamsicle chocolate bar”), but afterwards the lingering orange flavor becomes a little bit tart in your mouth. It’s something of a rarity in that it’s a mass-produced convenience store chocolate bar that you actually want to savor. It’s a pity this flavor never caught on in the U.S., but maybe they’ll bring it back someday. If not… well, I end up in Japan at least once a year, so I suppose it’s reason enough to suffer through those interminable trans-Pacific flights.