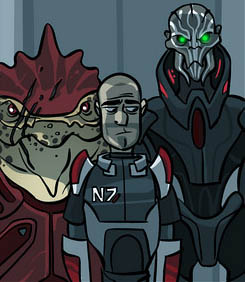 Everyone hated the elevators in Mass Effect. They were simply an attempt by BioWare to create seamless environments, of course — loading times for new areas were masked by having the team stand around in an elevator while the data streamed in, with news casts and incidental dialogue for added color. A nice effort, but one that ultimately became the butt of jokes across the Internet. So, I wasn’t terribly surprised to see the sequel revert to more traditional loading screens, which are actually pretty neat if you pay attention to what they’re actually showing you.

As a result, Mass Effect 2 doesn’t have any elevators. Well, almost. There is one that your party rides, just once; it’s set in a dramatic cutscene in a section that BioWare demoed ages ago. What I didn’t realize at the demo was that if you listen carefully, beneath all the tense dialogue, you can hear the faint strains of the peppy music they piped in to all the elevators in the first game. That, my friends, is continuity.