Well, I guess that liveblog didn’t work out quite as smashingly as I’d hoped, but it’s not my fault. Nor was it the gin-and-tonics. Right after I posted the last update, Chef Ryan glared at everyone who was hanging out in his kitchen eating all his fried eggplant and demanded we go sit at the table. A few moments later, the completed repast was served. It was weird, because when I left the kitchen, all the dishes seemed to be in their base components; yet about two minutes later, we were served golden-brown pan-fried sole over a bed of sauteed brussels sprouts and a potato au gratin. I would theorize that he simply dumped all the raw ingredients into the trash and whipped out meals he had secretly prepared in advance of the dinner party, but I know better. He’s simply that awesome in the kitchen. 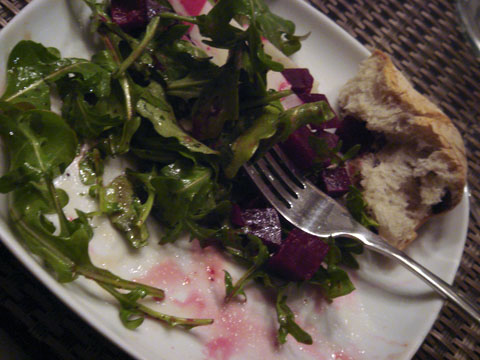 "The beets in this salad are delicious," I opined. Wait -- beets? Delicious? But I hated them as a kid! That's when I knew I had pupated at last into my adult form.

Besides, now that I think back on it — which is of course completely contrary to the entire purpose of a liveblog — I recall that he led off with a salad. Simple mixed greens, beets, and an Italian cheese whose name eludes me. I’m sorry for the vagueness; I was the least “foodie” person in attendance, which is why I was liveblogging and not, say, helping to prepare the food. Part of the reason we launched this blog is so that I may learn more about food by immersion. (Not literal immersion.)

The salad kept our mouths and brains occupied for several minutes, which must have been when the chef put the finishing touches on the meal. Tricky!

Fish is the greatest thing. I grew up in West Texas, so to Young Jeremy fish was this sort of foul-smelling, rubbery thing that was sometimes inflicted upon us, or else a curious foul-smelling sandwich meat that was sold in cans. Now that I live somewhere near the water and can eat fish that was plucked from the ocean somewhat recently, I have discovered that there is very nearly no kind of seafood I don’t like. I’m not so big on raw squid, but even that’s palatable if served correctly. Unsurprisingly, I really enjoyed last night’s meal.

I’m not sure that I’ve ever had dover sole before, but it seems like the sort of fish that requires an expert touch. Ryan said he selected it over the more common types of sole because he likes its thinness and delicacy — which, in cooking terms, means it’s the sort of meat that can go from succulent to overcooked in an instant. Ryan lightly breaded and pan-fried the fish, and he did it just right, so that every bite was perfect. I know from experience this isn’t easy to do, since the thinnest extremities of a fillet often end up overdone if you leave it on the heat long enough to properly cook the thickest portions.

Sole in itself isn’t a terribly flavorful fish, even prepared in such a fattening manner. In this case, the sides balanced it out: The fish was served on a bed of chopped brussels sprouts sauteed with mushrooms and olive oil (among other things), which had a very slight bitterness that complemented the neutrality of the fish. Sitting aside the sprouts were homemade potatoes au gratin — not overpoweringly cheesy, but just rich enough to balance the other flavors. 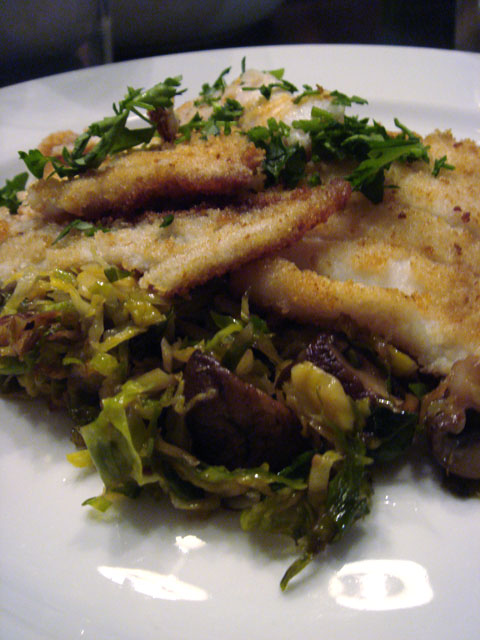 Unfortunately, food photography is as difficult as Cat keeps telling me, so I’m afraid this photo doesn’t properly convey the excellence of our meal. I fear you will have to take it on faith that it was, indeed, excellent.

You’ll probably be pleased to know that I don’t intend to liveblog meals. It was an interesting experiment in irony, but on the whole I think I prefer to socialize and enjoy the food — at least, when it’s this good.