OK, look, I swear this is going to be the last not-yet-available-in-the-U.S. title I include in my 2009 favorites. 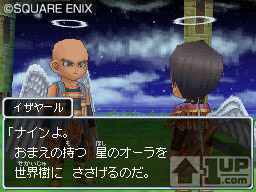 I didn’t mean to get hooked on Dragon Quest IX, but as it stands my game clock currently shows more than 60 hours invested in the game. And it would be a heck of a lot more if I had spent more time in Tokyo with the game set to passerby communication mode, because it’s seriously a fantastic addition to the game that, if done right, will totally force me to spend a few hundred hours with the U.S. game. The core game itself isn’t too bad, either — a bit on the easy side, though. I remember a lot of pre-release developer hype about how this would be the hardest Dragon Quest ever, but the opposite has been my experience. I’m on my way to collect the last of seven magical plot MacGuffins, and my only defeats have come at the hands of bonus bosses I downloaded over Nintendo’s WFC. And I haven’t even gone through the goofily baroque requirements to earn the locked job classes! I’ve been playing like a bum, and I’m still cakewalking through the adventure.

That was initially disappointing to me until I tested the passive communication feature in Tokyo and discovered that the real point of DQIX isn’t the almost-nonexistent story or fairly rote main quest. That stuff is basically just the primer; DQIX shines in its post-game content. 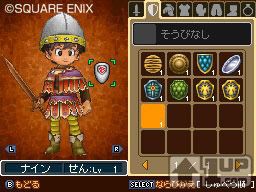 The game also helped enlighten me as to the appeal of loot-centric games such as Diablo and Monster Hunter. DQIX gives players a party of four warriors, all totally customizable from the Akira Toriyama Big Book of DragonBall Templates, and every bit of gear you equip shows up on your warriors. And you can create a ridiculous amount of gear through alchemy, based on loot drops. By this point in the game, I’ve found much better equipment than a helmet that looks like a blue Slime, but by god there’s no way I’m having my partisan-wielding warrior swap out her Slime helmet for something more mundane.

(I did upgrade my female characters to real trousers as soon as something more durable than the obligatory battle panties became available, though.) 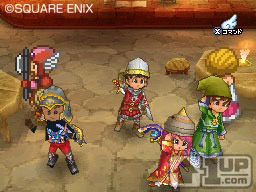 I dunno, DQIX is simply addictive, especially once you factor in the weekly downloads and the communication features and such. And while it’s not exactly a technological tour de force, it’s just advanced enough over its predecessors (besides Dragon Quest VIII, obviously) to make the DS remakes feel a bit pokier and more dated than they did before I’d played DQIX. Anyway, I’ve played a stupid amount of this game in a language I only halfway understand, and if Nintendo and Square Enix make smart localization choices — which is going to be tricky, given that so much of what makes DQIX interesting is specifically geared toward the Japanese market — I can foresee it becoming a tiny monster over here, too. Anyway, here’s hoping the U.S. version shows up sooner than later, and that it manages to translate this semi-multiplayer style that Japan loves so much into something Americans can sink their teeth into as well.

(Mainly, I want DQIX to arrive before PAX this fall so I can sneak away from our booth and hang out in the handheld lounge.)