Ah, I’ve done it again. I’ve added another game to this list of my favorite games from 2009 that wasn’t actually released in the U.S. this year. However, this time I’m not going solely off of import impressions…. 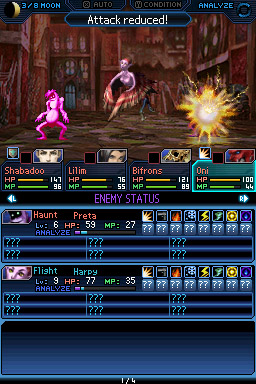 I mean, sure, I played a few hours of the import version of Strange Journey, and by crackie I liked it. But when Atlus sent us a previewable build of the English version a few weeks ago, I grabbed that thing and poured nearly 40 hours into it. I didn’t have time to finish the game, though. I think I made it to about the halfway point. It’s really a pretty humongous RPG, which probably shouldn’t be too surprising since it draws on Etrian Odyssey for technology and inspiration. Eventually, I had to surrender the cart at the climax of section 4, Delphinus. I jotted down passwords for some of the more obscure demons I’d fused, handed the ROM over to another editor (I’m abstaining from writing any more Shin Megami Tensei reviews for 1UP since there’s a potential conflict of interest in that a former-coworker-slash-close-friend localizes them) and am eagerly waiting for March, when I will buy a copy of the game and bludgeon my way to the end. Although I guess the Etrian Odyssey III import shows up around the same time. Oh, and Final Fantasy XIII. And Yakuza 3. Decisions, decisions. And here Gamasutra says the Japanese RPG is dying? Pfeh.

Anyway, 2009 was the year I finally got into MegaTen. Not coincidentally, it was also the year that MegaTen started showing up on the current handhelds. The funny thing is that I enjoyed each of the three games, but I liked each one slightly more than the one before. Devil Survivor was really good! But Persona was even better. And yet, Strange Journey trumped them all.

I was sucked in the moment I saw the Famitsu scans and realized, “Oh dang, it’s MegaTen meets Etrian Odyssey.” But make no mistake; there’s more of the former here than the latter. Yeah, it’s a first-person dungeon crawler divided into sectors, and it includes plenty of sidequests to keep you involved, but Strange Journey is very much crafted in the tradition of the 16-bit Shin Megami Tensei games that never made it to the U.S. It’s MegaTen going back to its roots — a technologically regressive (but mechanically progressive) sequel to Nocturne. It’s vastly more story-intensive than an Etrian game, and you control only a single human party member. The rest of your team is made up of demons (and occasionally angels) that you make pacts with, in the standard MegaTen style.

Strange Journey is a big part of why Order of Ecclesia seems so uninteresting to me. Strange Journey is a tough game — I made it as far as a boss that wiped out my seemingly invincible team in two rounds before I had to give up the ROM — but it’s a sort of difficulty that comes fairly and can be countered with smart play. Your protagonist works in tandem with three different demons, and the shape of your party determines your strengths, weaknesses, and resistances. If you know you’re going into an area where enemies like to use the curse-affinity instant-death spell Mudoon and you choose to take a group of holy-aligned demons with a weakness to curse, well, you deserve to lose. On the other hand, if you stock up on allies with a resistance to curse but who don’t have the ability to hit enemies in their own weak spots, your battles will drag on endlessly. It’s entirely possible to build yourself a demon with no serious weaknesses, but each demon has a sort of natural soft level cap and their skills eventually become outmoded; at some point, you’ll have to surrender your favorite fighters and try to forge suitable replacements. 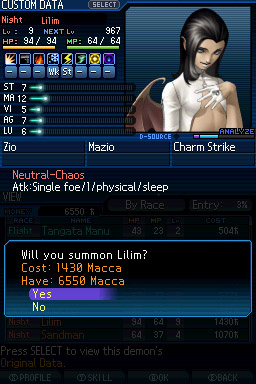 Choosing your party — and crafting it with the fusion system — is the heart of the game. There are a ridiculous number of factors to keep in mind, such as elemental vulnerabilities, attack types, inherited traits… creating the ultimate demon isn’t entirely unlike juggling those invisible stats in Pokémon, except less opaque and not invisible. Adding to the challenge is the fact that you can’t just carry around a massive party of demons; you can only travel with a limited number, and must dismiss or fuse some in order to acquire new ones. It’s the sort of game that should definitely appeal to anyone who loves to refine stats and come up with ultimate builds, although that’s not strictly necessary in order to succeed. You just have to play smart and make the best of your resources.

All of this is wrapped in a fairly sober sci-fi wrapper. If the anime school days style of Persona 3 and 4 is a turn-off, you’ll definitely appreciate Strange Journey, which involves military expeditions and elite soldiers and a world-threatening crisis that’s making the United Nations sweat it out as you battle through a dimensional rift in Antarctica.

In a way, I’m sad Strange Journey is a DS game, because the platform really limits its presentation and I think a lot of people will write it off as a kid’s game or something for flaky anime otaku, when in fact its tone is remarkably similar to popular big-budget western RPGs like Fallout 3 and Dragon Age. On the other hand, since it’s a DS game, I can more easily make time to revisit it when it launches in the U.S. I’m already thinking about how to build myself a team capable of handing that stupid boss his own arse in just a few short rounds….