Looking back over my own contributions to GameSpite Quarterly 3, I was struck by a recurring theme in several of my write-ups for Nintendo-developed games. A good deal of what I loved about the company’s 8- and 16-bit classics is the sense of discovery, of being given a world to explore and the means by which to go about it yet no explicit instructions how to apply those tools and abilities to complete the task at hand. I even name-dropped Metroid on (I think) last week’s 1UP podcast as an example of an organic in-game tutorial.

To reiterate, Metroid was designed with the knowledge that the people who were playing it in 1986 were new to side-scrolling action games (Super Mario Bros. having popularized them only a year prior), yet its creators wanted to break beyond the bounds of forced left-right side-scrolling. Rather than simply hope players would eventually come to understand, oh, you can and should move in all directions in this game, they instead put an object lesson in the opening area by creating a low passage in a room to the right of the starting point. This obstruction could only be cleared by ducking into a ball, for which you’d need the Maru-Mari power-up, which was slightly to the left of the starting point. They knew most people would automatically move right, because that’s how you started the game in Mario and Adventure Island even Pac-Land before them. The placement of this obstacle and the tool necessary to overcome it were a subtle way of saying, “Here are the rules of this game. They’re a little different than you’re accustomed to. You will need to understand how they work.” Speaking for myself and everyone else I’ve seen play Metroid for the first time, the game’s flow works the same for pretty much everyone: Players make their way right, learning to shoot (at falling foes) and jump (over enemies too low to be shot). Then they hit the wall, literally, and wonder why they can’t go on. Eventually, they begin to wander to the left and make their way back to the starting area. At this point, they’re starting to feel a little frustrated — all that progress wasted! — but then they notice you can move left from the starting blocks and, hey, one screen over is this new ability.

It’s great game design — even if the rest of Metroid was often maddeningly opaque — and what’s more is that it’s exactly the sort of design that was a hallmark of Nintendo in the olden days. Someone recently mentioned how Super Mario Bros. 3 does something similar in World 1-1: The first screen or two are awfully similar to the original Super Mario, so you get the basics down: Hop on or over a Goomba, hit a block to snag a power-up. But things immediately change from the previous game. The Mushroom power-up goes left instead of right like you’d expect after Mario’s previous outing, catching you off-guard and forcing you to rush to grab it. Soon after, you come across a power-up block on the ground, the first block ever that you’ve been unable to break by jumping. Kick a turtle shell into it and a Leaf pops out, which you can then use to fly by running along the subsequent straightaway — an ability hinted at by a trail of coins leading impossibly into the sky.

It’s little things like these that games seem to have lost sight of over the years. We talk about the complexity of modern games, but the NES era wasn’t exactly simple-minded. Some of the classics we recall so fondly were perfectly intricate, yet they managed to convey the proper application of their more advanced techniques with simple, thoughtful level design. I actually kind of blame Mario for setting things off-track, to be honest: Super Mario World is the first game I can recall with in-game hint boxes to explain how to use your abilities. Of course, you didn’t need to hit them, but the slippery slope had been breached nevertheless, and eventually those optional hint boxes mutated into stultifying hour-long tutorials. Now, plenty of developers rely entirely on in-game text or dialogue to explain how to go about things, obviating the need for level design that does the same thing. That’s a shame. I miss thoughtful level design. 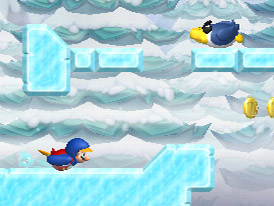 I’m happy to see, at least, that Nintendo is pulling back from the precipice over which Twilight Princess plunged so tragically. Great game, but did it really need to hold your hand delicately for five hours before letting you actually play? New Super Mario Bros. Wii is encouraging: Rather than explain its new abilities with text, it puts them in places where they simply make sense, uses a quick pop-up icon over your character’s head to show what needs to be done to activate your new powers, and often even gives silent hints to your new potential by showing bad guys using similar powers.

Even Spirit Tracks gives players some credit for intelligence: The game’s second sub-weapon, the boomerang, has the newly-added power to spread ice and freeze water. This is never stated in the game, but both water and ice activation points are placed in such a way that you’re bound to activate the ability by accident shortly after picking up the weapon. It’s a nice return to a more “learn it for yourself approach” to the series.

Of course, most of the game’s puzzles are still explained with decontextualized hint blocks rather than, say, natural character dialogue, or intuitive design. But these days I’ll settle for any victory, however tiny.

24 thoughts on “Removing the training wheels”