So, New Super Mario Bros. Wii is pretty good. I’m sure the 1UP score will skew high compared to a lot of other reviews, but bear in mind that I reviewed it based on what it does as opposed to some fevered vision of what I think it should do. It’s designed to be a universally accessible and enjoyable game, and NSMB Wii passed the Fiancée Test, which made the difference between a great score and a top score. (You can hear about said test on today’s 1UP podcast, whenever that goes online; I’m too medication-addled to type it all out right now.)

I will admit there is a tiny part of me that wishes NSMB Wii had been done up in a fully retro style with 16-bit graphics. There’s really nothing about the game that couldn’t have been done with the Super NES… well, OK, the level zooming during multiplayer might have required a Neo-Geo. But still, NSMB Wii sticks closely to the tenets of classic 2D gaming, and it’s wonderful for that… but there is a little charm lost with the use of polygons. 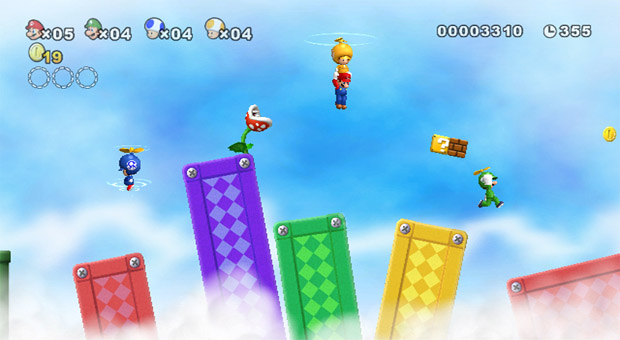 Not too much charm, fortunately. Look at those adorable Toads with their precious little propeller caps. Awwww.

Anyway, going with a hand-drawn style would have been a deathblow for the game. Americans hate hand-drawn art to death. It’s probably no coincidence that Disney is releasing its first traditionally animated feature in something like six years (The Princess and the Frog) while hedging its bets with a horrible-looking CG vehicle for Jim Carrey to desecrate all you hold dear about Charles Dickens. Care to guess which will claim the bigger box office take?

But beyond the sheer economics of the thing, Nintendo’s smart to go with the 2.5D style regardless, because it’s easier for the casual gaming audience to deal with. A while back, Tomm Hulett (hi Tomm!) posted a comment on the site that suggested 3D games are more visually intuitive for casual gamers — which is true, to a degree. The visual depth and dimension perspective offered by polygons more closely mimic how we actually see the world and require less interpretation than a two-dimensional abstraction.

However, 3D gaming — which is to say, specifically, the navigation of 3D space — is not intuitive. On the contrary, it requires training and practice to master. As a point of fact, Mario games offered a perfect opportunity to train in 3D with the opening areas of Super Mario 64: The open field outside the castle and Lakitu-as-point-of-view conceit were deliberately positioned as an introduction to dealing with the realities of 3D space. Of course, that was 13 years ago, and not everyone buying games now — especially the gaming novitiates Nintendo prizes — has played Mario 64.

So, Nintendo can cram a tutorial into the beginning of every game it makes and bore their most loyal fans to tears… or they can simply pretend to create 3D spaces by offering the appearance of depth while sticking to the far more intuitive left-to-right progression of old-fashioned 2D. Fake 3D may look more natural, but once you begin trying to judge relative positions depth on what is ultimately a flat, mathematical representation of space, things suddenly become trickier. But moving along a line, with obviously-placed obstacles and objectives? No sweat. Anyone can handle that.

54 thoughts on “2D: New Super Mario Bros. and case of the extra half-dimension”