It just goes to show 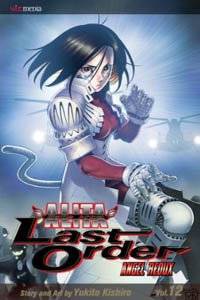 I picked up the latest English volume of Battle Angel Alita: Last Order this week. Aside from the dopey extended ruminations on SPAAAAACE KARAAATEEEE, it was pretty dang good. If nothing else, it was nice to see the main character back in action after entirely too long — and her newfound confidence was a nice contrast to all the spineless dithering of earlier volumes of Last Order.

I am not, however, entirely sure how I feel about her new appearance. The armored skirt thing is all well and good, but for some reason she has a tail. Kinda like Goku. I suppose it would be easy to write off this odd new development as a desperate attempt by Yukito Kishiro to pander to catgirl fetishists or some such, but I don’t really think that’s the case at all.

No, what it really means is that once you throw a battle tournament into the mix, any manga eventually mutates into Dragon Ball.

9 thoughts on “It just goes to show”