2D (or not 2D): Having faith in Rocket Knight

As I was preparing for my flight home from Tokyo Game Show about ten days ago, dreading the inevitable jetlag that would follow, Matt Leone asked if I would be willing to follow up my flight from TGS with a trip to L.A. to check out Konami’s new sequel to Rocket Knight. Despite my grim realization that this would do said jetlag no favors, I happily agreed — in part because it would be a cool exclusive for the site, in part because I’m all for classic revivals, in part because it would be a good excuse to finally play the original Sparkster trilogy, and in part because it’s connected to occasional GameSpite contributor Tomm Hulett. I’ve known Tomm for an awfully long time now, and we’ve become friends in large part because we share similar tastes in games (for instance, while I was champing at the bit for games like Bumpy Trot and Contact to make their way west, he helped get them localized). I don’t have any nostalgic fondness for Rocket Knight (though I’m learning to love it), but I was interested to see what he’d do with such a unique series. Contra 4 was pretty much exactly what I’d been wanting from a Contra game for a decade — more running and gunning, fewer show-stopping boss battles — and my E3 demo of Silent Hill: Shattered Memories was genuinely astounding and made me interested in a game whose genre I actively avoid. So, I figured Rocket Knight had good odds of impressing me.

And it did! I’m a picky bastard when it comes to classic-style remakes and revivals, but this one looks to be on the right track. I’ve seen a lot of complaints about the game’s visual style, but with a fast-paced action game like this, aesthetics are a secondary consideration to how a game feels. How it plays. Is it responsive? Does it move well without excessive animation getting in the way? I do believe the answer is yes. Neither Matt nor I were able to play Rocket Knight for ourselves, but it was obvious from both the game trailer and the live demo we saw that Sparkster moves right. I’m not alone in coming to this conclusion; Matt noticed it as well. And with that, my uncertainty about the game fell away. 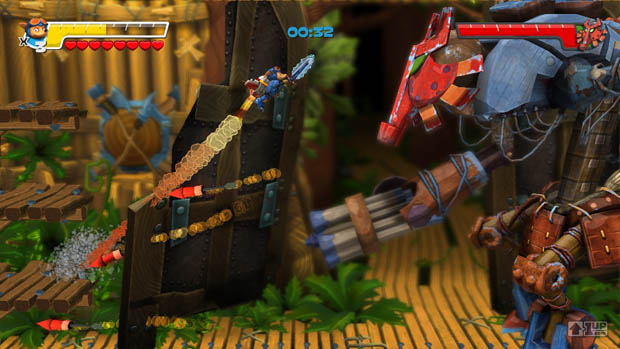 Finding the proper feel of a platformer, I suspect, is the trickiest part of making a game in the classic style. And it’s no less daunting for the fact that there have been so many great platformers over the years to be compared to. But it’s essential to get that part right, because in the end it’s how a game plays that determines whether or not it’s regarded with fondness years later.

Look: Super Mario Bros. is remembered because it was weird, sure. But more importantly, it was the first platformer to feel perfect. The games that had come before were too limited, too cramped, too stiff, too punishing. Mario had these amazing spot-on physics that offered multiple intuitive levels of control for the way you ran, the way you jumped, the way you swam. There was just a touch of inertia to Mario’s movements, but not enough to be frustrating — merely enough to keep you on your toes and enable sneaky tricks like running and ducking under low ceilings. Mario moved the way you thought he should, even if it didn’t bear much relation to reality, and that’s why his game was so incredibly fun (and remains so enduring).

The biggest complaint I have about 2.5D platformers isn’t the look of the things; I accept that, realistically speaking, 3D models are a lot more economical than classic sprites. Especially on an HD system. Look at King of Fighters XII: Gorgeous game, but really only half a game. The general consensus is that SNK Playmore will eventually create a full HD version of KoF, but it’ll come incrementally, because those graphics are just so incredibly expensive to make for better-than-standard-definition.

Given a choice between low-rez sprites or high-definition polygons, I’ll take… well, a mix of both, actually. There’s room for each approach. I certainly won’t begrudge a developer (or, more to the point, a publisher, since they’re the ones who bankroll these things) for choosing to go with the style that’ll run on the same platform as Halo or The Last Guardian. In fact, I think it’s great. I’d love for more new classic-style games to be available on HD systems, help shake off the stigma that just because something employs an older format of gameplay it’s inherently dated. In a perfect world, there would be a whole damn lot of games that look like Vanillaware creations; in our miserable and miserly real world, though, I realize that certain tradeoffs have to be made. So it goes.

Anyway, no; the biggest complaint I have about 2.5D platformers is the way their looks tend to interfere with the gameplay. There’s almost always less precision, less responsiveness to a polygonal character than to a sprite. That’s simply how it works, for any number of technical and aesthetic reasons. It’s pretty rare to come across a 2.5D game that feels as snappy as a true hand-drawn 2D platformer. Maybe it’s because developers won’t commit to sacrificing smoothness for the sake of speed, or maybe it’s because publishers get all fussy when games emphasize playability over looking pretty for the trailer. Whatever; the point is, polygons are often a sign of compromised mechanics. 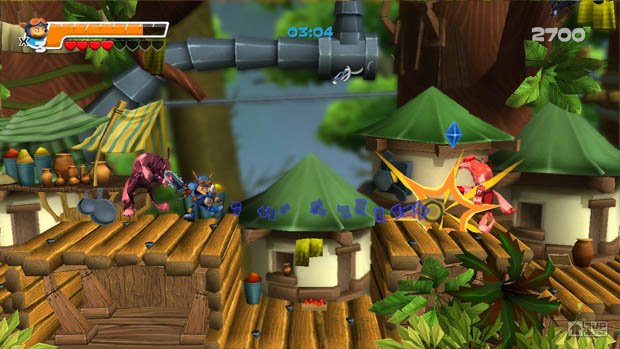 Fortunately, that doesn’t seem to be the case with Rocket Knight. Climax genuinely looks to have put the action ahead of the game’s looks, which is why the camera is pulled back a bit more than most people expect. The characters are smaller and the perspective larger so that everything can move more speedily and players will have more advance warning of hazards, allowing them to react quickly. I definitely prefer that style. Given a choice between tiny precision and jumbo clumsiness, I’ll take tiny every time.

However, I don’t want to go to bat too vigorously for this game without having played it. I can say objectively (and with corroboration!) that it looks great in motion, but I’m always mindful of appearances, and I don’t want to give the impression that I’m only cheerleading Rocket Knight because I know the producer. I just like the way it moves! That’s all. I figure I’ve been enough of a hardass in my reviews over the years that people trust me to be perfectly honest when I think a game sucks, regardless of who worked on it. Of course, needless to say, someone else will be reviewing Rocket Knight. I’m OK with handling impressions and previews, but I make it a point not to review games if I know people who are heavily involved in their development or localization.

(Well, I did make an exception for the Persona remake, I admit… but that’s just because I got so hooked on the game when I was previewing it that I couldn’t bear to give up the UMD ROM. Oh, come on, cut me some slack. It’s Persona! And I’m only human.)