It’s been a strange TGS. It was a much smaller show than in years past, and I only filed about half as many stories as usual. Yet I still found myself with less discretionary time for things like blogging, which is why there’s been a picture of Zelos at the top of the site all week. I submitted my last TGS write-up a few hours ago, so now it’s just, I dunno, hanging out and trying to find something to film/discuss for Retronauts. (I did film a Bonus Stage yesterday with the creators of La Mulana; that was kind of rad.)

A strange trip deserves strange food, so I’ve been hunting something appropriately weird to eat. While I doubt anything will match the sheer awfulness of last year’s unrefrigerated konbini teriyaki burger — though I did eat a piece of beef stomach the other night, or rather I masticated it for several minutes before deciding that something so rubbery is best left to do the digesting rather than being digested — I’ve still had my eyes peeled. And I think I might have a winner: Taiyaki!? Gumi. 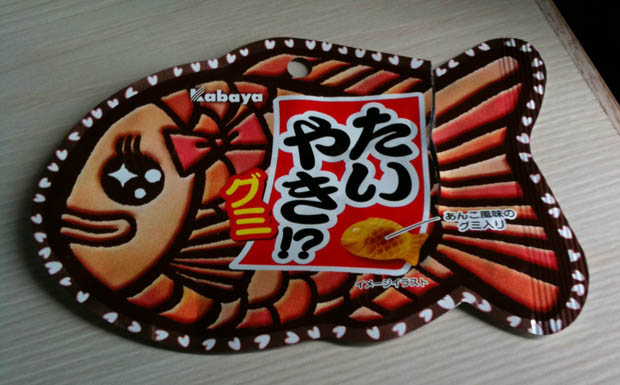 It is… taiyaki-shaped gummy snacks. And yes, they’re taiyaki-flavored, as well.

If you’re not familiar with taiyaki, (1) I feel bad for you and (2) they’re a waffle-like pastry traditionally stuffed with red bean paste. There’s a shop in San Francisco’s Japantown that also fills them with chocolate or banana as well, and I found a place last year in Harajuku that sold mini-taiyaki in many wonderful flavors. They are delicious, in short. But they are primarily bread, and bread products are always very strange when emulated in gummy form. Taiyaki is no different!

The flavor of Taiyaki!? Gumi is remarkably similar to the real thing, although it kind of mashes the bread and azuki flavors together into a single corn syrup concoction. That’s fine, but the texture is… something. Something gross. Pastries should not be rubbery. Kind of like meat, really. Between this and that stomach, I think the overriding lesson of this trip has been “do not put things in your mouth if they exhibit excessive elasticity.”

On the happier side of the balance, I found an entire bag of orange Kit Kat, which is Japan’s single greatest contribution to the art of packaged mass-market candies. They are a precious treasure, and I will be hoarding them jealously.