I woke up this morning (much too early) and looked out my window and noticed for the first time that beyond the clutter of Shibuya is a dense knot of trees, a few acres in size. On the other side I can see that really ridiculous latticed building in Shinjuku, but it was the trees that interested me. So, I decided to go for a walk and see what it is. The answer, it turns out, is Yoyogi Park, which was less relaxing than expected. It’s currently under reconstruction in a bid for the 2016 Olympics (and because Japan is always in a state of reconstruction; it’s a growth industry). Each bench I passed was staked out as a bed by a homeless person. The public bathrooms make Texas roadside restrooms look sanitary. And then a crow lighted in a tree above me and pooped with such force that it struck the ground and the spatter hit my shirt. This trip is not off to a good start!

Despite the awfulness of Yoyogi Park, it was nice to get away from the familiar setting of central Shibuya and into more residential areas where everything isn’t catering to tourists and teens. Which isn’t to say there isn’t all kinds of fascinatingly misused English to be found there, though! I passed a building, very austere and granite-façaded, called simply “Life Creation.” Maybe I’ve just been playing too much Persona, but seeing a sight like that tucked away in the recesses of Tokyo was really kind of eerie. 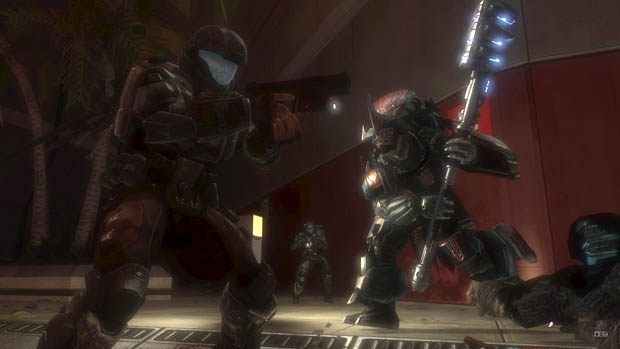 I’m actually having less time to write than I’d expected since everyone wants to be all social and crap. But I’d hate for this post not to have some sort of game content to it, so here is a link to my Halo 3: ODST review. Weirdly, readers have been a lot more receptive to my opinions than I had expected! Being earmarked for a high-profile review like this is usually a ticket to have the Internet poop on you, much like a Yoyogi crow, but not this time. I don’t know what to think. Just when I assume I have the Internet all figured out, it gets all civil on me. Freaks.