Hey, look, I did another one of these. I probably ought to try not to let a month pass between each entry of the NES ABC. In my defense, I’ve been a bit occupied with certain other projects lately. 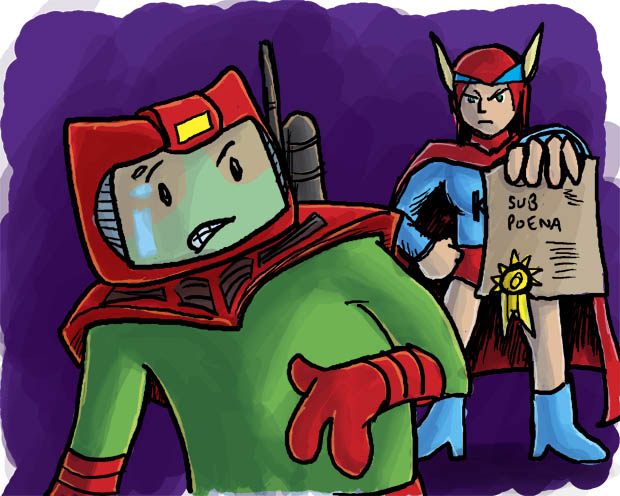 TOASTY: You know how these days Natsume is pretty much “the company that coasts along on endless Animal Crossing games”?

TOASTY: Eh, whatever. Where I was headed with this is that unless you’re a 12-year-old girl, Natsume is pretty much worthless to you, because all they make is the same worthless cutey-cute farm simulation over and over again.

TOASTY: I’m a…? Er, anyway, my point is that it could be worse. Natsume could be the company they were in the NES days. Back then, instead of endlessly rehashing their own creation to the point of stupidity, they were much less ambitious. Instead, they rehashed everyone else’s ideas. You know how Shadow of the Ninja was such a convincing Ninja Gaiden ripoff that Tecmo went ahead and published the Game Boy Shadow of the Ninja as a Ninja Gaiden game? Well, after playing Abadox, it’s clear to me that this was Natsume’s primary tactic at the time: swipe a game from someone else, do the absolute minimum necessary to avoid a lawsuit, and wait for the money to pour in.

TOASTY: Well, then, clearly you have never played Abadox. Or maybe you’ve never played Life Force? Because that’s what Abadox is, you know. It’s Life Force. Totally and completely. OK, sure, you control a guy in a suit instead of a spaceship, but that just means Natsume ripped off Section-Z a little bit, too. Other than that, the two games are embarrassingly similar: you scroll automatically left to right through grotesque biomatter as naggingly familiar waves of enemies attack. Spiky protuberances emerge from the ceiling and floor. At one point, you have to shoot through weak bits in a wall to advance. And then you meet the boss, a sort of lumpy brain-like thing that has to be shot in the eye. And this is just the first stage!

YUKI: Wasn’t Life Force the one that switched between horizontal and vertical shooting? So it’s just a coincidence. The similarities obviously end once you reach the second level.

TOASTY: Oh, you think so? What if I told you the second stage of Abadox is also a vertically-scrolling level?

YUKI: Come on, it can’t really be that shameless.

TOASTY: You’re right, Abadox isn’t completely the same as Life Force. The vertical stages scroll downward instead of up. As this is possibly the only shooter in the world to play like this, it’s bafflingly confusing. Like playing Mario right-to-left.

YUKI: But still… I mean, it doesn’t have the same power-up system as Life Force, right? That’s kind of a trademark.

TOASTY: No, you’re right: Abadox has a strictly linear power-up system. But Life Force on NES is a weird mash-up of the arcade games Salamander and Life Force, and the Gradius-style upgrades were added somewhere along the way. Back in the earliest chunks of its DNA is a linear power-up system startlingly similar to Abadox’s. The whole thing is some sort of proto-Life Force.

YUKI: Wow. Is it like this all the way through the game?

TOASTY: Beats me. All I could think about the entire time I was playing is how much better Life Force is, so I bailed midway through the second level and destroyed the Bacterions a few times instead.

YUKI: And you call yourself a reviewer? Where’s the due diligence? I bet the game probably gets a lot better after the first few stages.

TOASTY: Yeah… maybe not. But, here’s some actual research for you: If you happen to notice the music sounds a lot like the tunes from Life Force’s Konami cousin Contra, that’s because Natsume actually employed one of the sound programmers for the NES version of Contra as the composer for this game.