Oops, I had intended to get the ball rolling on posting Quarterly 2 content, but then I was sidetracked by the need to review Shadow Complex. It was longer than I had anticipated, although that’s due in part to the frustrating lack of shortcuts in the game. You know how awesome it was when you realized you could bomb the glass cylinder in Maridia to open a quick path between the deep underwater areas and the familiar rocky paths of Brinstar? Yeah, there’s none of that in Shadow Complex. Which is weird, you know, since it’s a game that apes Super Metroid in every other way possible. 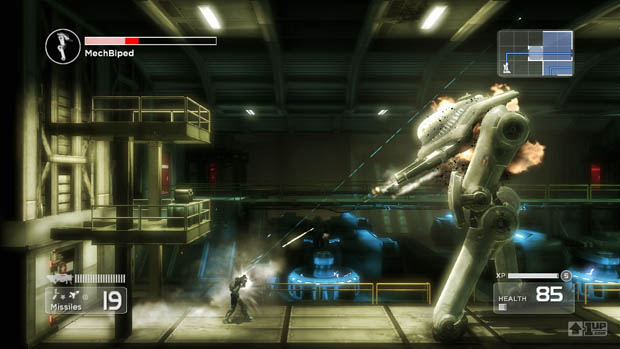 Oh, I know what you’re thinking, but don’t be fooled by this screen. It really doesn’t imitate Metal Gear Solid at all, outside of these dudes. And they’re nowhere near as fun as the tachikoma ripoffs in any case.

Anyway, I gave it a B: a solid score for a solid game. I can tell it’s a good one, because I keep thinking about the items I missed and how I could most efficiently make my way through the levels to collect them. Do stick around for the comments on the review, though, if only to see 1UP chastised for letting someone review the game who clearly has never really played a classic Metroid. Ahh, Internet, how I love you.

Apparently we’re doing a 1UP Show-style video chat on the game tomorrow, so I guess you can watch me sniffle and mumble my way sickly through that as well.