The timing on this one worked out even better than I had intended: a couple of hours after posting yesterday’s Game Boy finale in Shantae, Ray’s epic Game Boy retrospective went live at 1UP, putting a wrap on our coverage there, too. And a little while after that, proof copies of GameSpite Quarterly 2 arrived via FedEx: 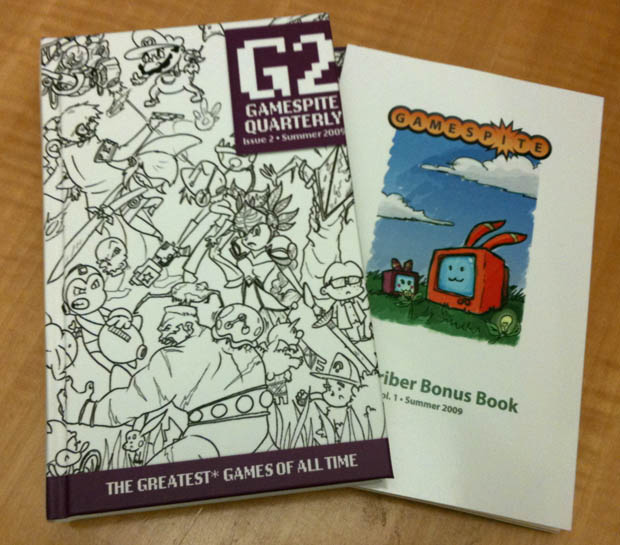 As you can see, the hardback cover art is a little messed up and needs to be reformatted, but besides that it looks frickin’ great. (And the paperback looks perfect.) Oh yeah, I need to upload the color cover, too. And do copy edits. And so on and so forth. Still! Almost there. If for some reason you had a hankerin’ to pick up the first issue, I’d say hold off for a week or so and get the two together to save shipping costs.

The subscriber bonus book came out a lot better than expected, too. Some of the text is a little squinty to read, but I had assumed it would be mostly illegible. Not so; the contents look pretty nice. I’ll be placing an order for those whenever I upload the final edition of GSQ2, I guess, and mailings will commence thereafter to the site’s loyal supporters. “But wait!” you protest. “I want one, yet the link for supporting the site has long since evaporated.” That’s true, but I do have something in mind that’ll be fair to everyone. Hopefully.