I think we can all agree that G.I. Joe: Rise of Cobra is going to be a terrible movie, though no doubt the degree of its terribleness will spark endless Internet debates. But it doesn’t matter; the movie is merely a commercial for the essence of G.I. Joe, which is to say “little tiny plastic mans.” The Rise of Cobra toyline landed at retail outlets across America this past weekend, so I decided to brace up against my crushing sense of poverty and pick up a few. Just a few, though. I realize that the eight-dollar asking price on these things is technically precisely in line, inflation-wise, with what the equivalent versions cost when I was a kid. Three bucks in 1983 bought about the same amount of food and stuff that eight bucks will net you now, right? But man, eight bucks for a little action figure is pretty dumb.

That being said, the new figures are shockingly great. My nine 2009 American funbuxx netted me a whole lot more detail and quality than my three 1983 dollars used to buy. I’m not entirely sure about the movie’s design aesthetics, but I’ll be doggoned if these aren’t about the most impressive 1/18-scale toys I’ve ever seen. Yes, yes, Microman has more posability, but Microman is featureless blank plastic. These little dudes are crammed with insane amounts of sculpted detail and articulation. 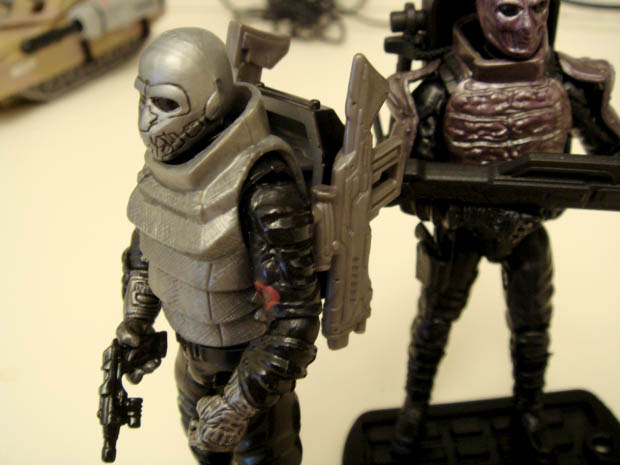 So, for instance, while I’m not sure why they gave the Neo-Viper (left) and Viper Commando (right) facemasks that make them look like the hybrid baby alien from Alien: Resurrection, I can’t deny that there’s some quality design happening. Their uniforms look like reinforced fabric, and their body armor has all kinds of minute texture. I’m especially impressed by the Neo-Viper’s gun/backpack interface which lets you attach his rifles to either side of his field kit, Mass Effect style. And despite all the detail, they’re really posable and actually have a much better range of motion than a lot of simpler-looking figures Hasbro was producing a year ago. Sure, I don’t really need it (since I pretty much just line up the toys on my shelf and leave them be), but if these had been the toys available when I was a kid I’d have been in friggin’ heaven. The whole reason I started buying G.I. Joe figures in the first place is because they were far more detailed and flexible than Kenner’s crummy Star Wars toys, and these are a few orders of magnitude more involved and playable than the best anyone could offer way back then.

Actually, that’s the other thing that impresses me about the new toy line: they’re intricate enough for stupid manchildren like me, but they’re crammed with enough play value to appeal to kids. It’s almost like Hasbro remembered who toys are actually supposed to be for! This, of course, has made many collectors angry. I’m trying not too hard to dwell on what this says about my peer group. 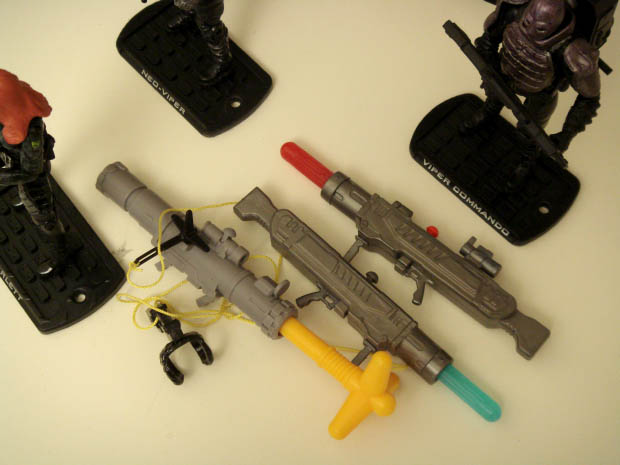 Basically, it seems like every figure in the line comes with a spring-loaded rocket launcher that’s inexplicably longer than the figure is tall. Silly, but the springs inside have some pretty decent power, none of this “safe for your eyeballs” nonsense like most toys are hampered by. And reportedly the launchers can attach to vehicles and playsets. My favorite of these so far is definitely Scarlett’s, the yellow one: not only does the missile look like a grappling hook, it’s attached on a string to a smaller grappling hook, which in turn is connected to a plastic harness that the figure can wear on her back. Basically this means Scarlett can hold a rocket launcher and fire a missile so powerful it launches her into the air. Brilliant.

If I were about, oh, eight years old (like I was in 1983), these would be the most amazing thing ever, and I’m glad Hasbro went ahead and included them despite knowing that a bunch of sweaty forum rats would mope about their existence. Being a purported adult, though, I’m just going to blog about them with a modicum of self-conscious embarrassment, then quietly line the figures up on the counter behind my desk. It’s what my eight-year-old self would have wanted.