Fish and visitors and Snakes

This year at E3, Hideo Kojima announced no less than three new Metal Gear games. Or was it four? I’ve lost count. In any case, that is, by my reckoning, about three or four too many.

It’s strange, but for the first time since I drooled over that ad for the NES game in 1988, the news of fresh Metal Gear content fills me with dismay rather than excitement. I’ve always loved the series, even despite its occasional (well, more than occasional) comical excesses, and I was right there on the front lines champing at the bit for Metal Gear Solid 4. Despite some very severe flaws and about 200% too much taking itself too seriously, I really enjoyed MGS4… once. But once I tried to replay it, I discovered that there’s nothing I want less than to spend any more time in the Metal Gear universe. As far as I’m concerned, MGS4 is the final word on the series; as I’ve suggested before, there’s too much baggage attached to the name now. MGS4 was 10 hours of brilliant game design and 10 hours of jaw-flapping verbosity about fussy plot points that ultimately didn’t matter. Kojima Pro would be well served to take the great game mechanics and concepts that made the first half of MGS4 so enjoyable and spin them into something new. 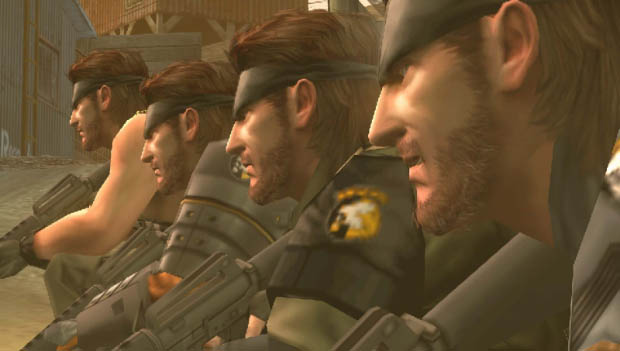 That, it seems, is precisely the opposite of what’s actually going to happen. By all impressions, Metal Gear Rising will feature a different play style — probably something more melee-oriented and less about stealth and precision — but it’ll almost certainly be bogged down in Metal Gear “lore.” Meanwhile, I’d really like to be excited about Peace Walker, because (1) Big Boss is awesome and (2) the name suggests it should come with a pedometer that links with the game and grants you special “peace points” based on your step count or something. Unfortunately, Peace Walker is a PSP game, which doesn’t give me much confidence.

There’s certainly nothing wrong with the PSP as a platform (at least technically — Sony’s idiocy is another matter entirely), but after all this time you’d hope a developer as high-profile as Kojima would understand how to work within a system’s limitations. But if that were the case, Peace Walker would be designed around the PSP’s lack of dual analog inputs and stick to the old-school top-down Metal Gear point of view. Alas, from what I can tell, Kojima’s going for a post-Subsistence third-person camera style — very modern and progressive, but also rather dependent on having proper camera controls. So it’ll be Portable Ops all over again. Count me out, thanks.

Maybe I’m just getting old, but after seeing more and more classic series dredged up or dragged out only to be regurgitated in far less satisfying modern incarnations, I’m increasingly of the mind that most franchises have a shelf life that should be respected. Better to develop new concepts than capitalize on familiarity and ruin the goodwill of its fans. Metal Gear looks to be about a year beyond its sell-by date now, and things get pretty rotten when they’ve had a year to spoil.

22 thoughts on “Fish and visitors and Snakes”