You know, before E3 kicked off — was it really just last week!? — I was dreading the whole thing, and all I could think about was how great it would be to be back home once the show was finished. But then the stupid event had to go and prove me wrong by being really excellent; lots of interesting things were shown, lots of interesting people sat to let me interview them, I met tons of fellow writers from the trenches of the gaming press. Heck, the show floor itself was even great, with larger, more spacious booths and fewer roving nerds to jostle with. Since booth babes and swag were in short supply, you didn’t even have to maneuver around sweat-soaked losers toting multiple bags of free crap, posing for pictures with courteous but clearly uncomfortable seminude women. I can’t imagine a better show.

Conversely, this week has been awful. I had intended to jump right back into the swing of things by getting back up to speed blogging here, but obviously that didn’t happen. I was briefly distracted by the human suffering inflicted by Black Sigil and the befuddlement cast by Final Fantasy IV: The After Years, and then all hell broke loose as I had to make a bunch of deposits on venues and such for my wedding, which wrecked my bank account, which left my finacée traveling to Las Vegas on business with hardly any cash to speak of. (It didn’t help that a greedy cabbie ripped her off for about $50 as soon as she landed.) I’d say the low point came the other day when she called me in a panic because she had gotten in a cab to the airport without realizing that it wouldn’t take a credit card and that she didn’t have the cash to pay for her ride, leading to a dispatcher attempting to have her arrested. While I was trying to sort that out, I learned my grandmother was in the hospital, which stressed me out even more given that my grandfather passed away the week after E3 2006, and part of what I hate about E3 is that I already associate it with that. So, yeah. It’s been a pretty bad week.

There was also the part about Loki’s great Game Boy history comic getting hit hard by Reddit and StumbleUpon, a traffic boost which is still wreaking havoc on the forums’ stability. Internet goons have been decrying the comic because it has too many words and not enough funny; knowing Reddit’s collective tastes, this means it lacks math nerd stalker creepiness masquerading as romanticism and adolescent screeds about how God is, like, this way fake idea. I’ve gotta say, I’m not a big fan of link aggregator sites like Digg, since the people they send have no interest in developing a long-term relationship with the sites they hammer en masse; the only benefit that a link from such places offers comes from the boost your banner ad impressions receive. Needless to say, this does you no damn good if your site doesn’t have banner ads. Then it’s just a lot of people racking up bandwidth charges so they can vomit a half-formed complaint and hyperactively flutter to the next shiny link that catches their attention.

God, I’m the Internet equivalent of a cranky old person yelling at kids to get off his lawn. “In my day, we had webrings! And link banners! And we had to hand-code our own HTML for our E/N websites! And we liked it that way!”

Anyway, they’re mostly gone now, Cat wasn’t arrested, and news on the hospital front seems positive, too. And to top it off, I decided not to force myself to play any more Black Sigil, because they don’t pay me enough to hurt myself like that. 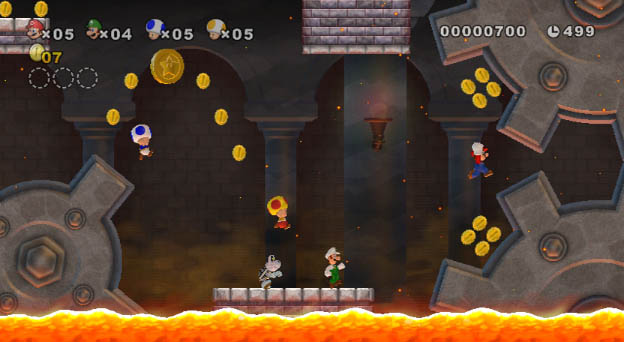 The one good thing about being away from E3 — well, besides not being in LA — is that the music from New Super Mario Bros. Wii is finally dislodged from my skull, replaced with “Ahead on Our Way” from Final Fantasy V. About bloody time.

Anyway, sorry to vent. But GameSpite is technically still my blog; I get to do that occasionally. Tomorrow: something topical. And I don’t mean ointments, baby.