The movie was pretty good!

The big surprise of the night, though? I let myself be cajoled into making our theatre outing a double-header with X-Men Origins, and it turned out not to be as terrible as I expected. Granted, I figured it would suck through a straw, but instead it was a slightly above-average Big Dumb Superhero Flick. Better than X-Men III and Spider-man 3, that’s for damn sure. I definitely didn’t expect my X-Men comics habit circa the Jim Lee reboot era would come in so handy, but having pored over the Larry Hama Wolverine comics back in the day I recognized an awful lot of the side characters and plot developments. So that was a pleasant 90-minute diversion. 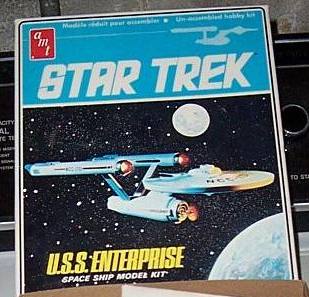 Trek, though, was the movie I had hoped The Phantom Menace would be — a fun, energetic, lighthearted revitalization of something that meant the world to me as a kid. I guess ten years late is better than never. Sometimes I wonder if I work with old video games in a desperate bid to recapture the sense of enthusiasm and enjoyment I felt about silly, meaningless things when I was young; for two hours last night, I had that feeling again.

Of course, the illusion of my teenage years won’t be complete until I track down an Enterprise model and sloppily assemble and paint it in my haste to have a display of the greatest sci-fi craft ever. For more authenticity, I should be more awkward around girls, too, but I don’t think Cat would necessarily appreciate that. So I’ll stick with the model project for now. I wonder if there are any Hobby Lobbies in San Francisco?