As part of my mandatory Star Trek refresher course, I’ve decided to thumb through a few of the more interesting Trek novels I read as a kid. And by “interesting” I mean “the ones that seemed kind of boring back then because I was too young to properly appreciate them.” Mostly these are the ones that involve the series’ main cast in only the most peripheral sense and instead focus on developing alien races or secondary characters as a means by which to flesh out the franchise’s universe. Not coincidentally, these are the ones that are less like dumb fanfic and more like actual sci-fi novels that just happen to take place in someone else’s toy box. 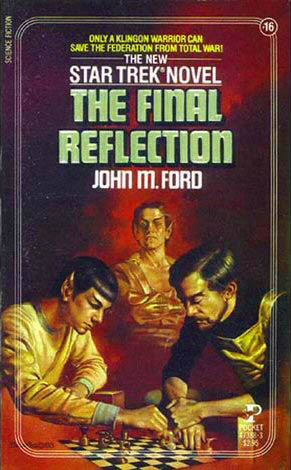 High on the list are the late John M. Ford’s works. He wrote two Trek novels back in the day, one of which — How Much for Just the Planet — I recall as being a hilarious farce nearly to the point of satire, a recollection the Internet seems happy to corroborate. His other contribution, though, was the sort of work that made my young eyes glaze right over. Entitled The Final Reflection, it was an intricate exploration of Klingon culture, which to that point had never really been tackled in the actual TV series beyond, “Boy, those Klingon guys sure are angry!” Of course, at this point the entire novel has been made completely moot by later television shows, but in a way that makes the book even more interesting. Because, really, the “official” Klingons ended up becoming pretty obnoxiously boring, to be honest.

I’m not terribly far into the book, but I really am enjoying it. The TV series’ core cast exists strictly as a framing device, and the central work is presented in-universe as something controversial, almost forbidden, which is a pleasant contrast to the Happy Hippie Space Utopia of the Roddenberry years… and handled a lot more gracefully than the fumbling undercurrents of cynicism more recent takes on Trek have tried to incorporate. Ford’s two contributions to the Trek non-canon are highly regarded, and I can see why: each was a very different work, but both were united by taking a rather skewed view of the franchise and creating something interesting out of it.

Yeah, good stuff. Unfortunately, I’ve had to put the book down, at least for a little while, because I’ve just reached the point where the narrative has introduced an intensely gorgeous Orion slave girl named… Rogaine.

Poor Mr. Ford. I’d really like to take your story seriously, but at the moment I just can’t. What a hairy predicament.

11 thoughts on “The final alopecia”