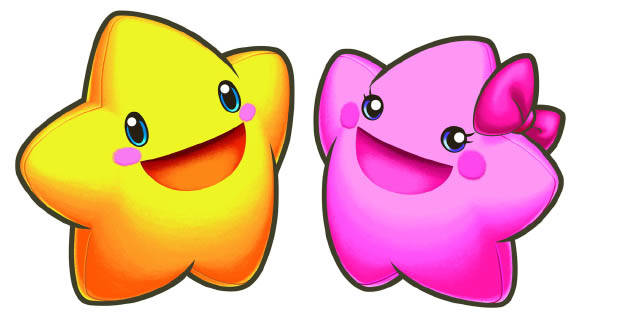 Nintendo announced a bunch of releases today, including the not-especially-surprising revelation that Punch-Out!! is due in May. Given that it’s pretty much a reskinning of an NES game, I’m really only surprised that it’s taking that long. But then they went and threw me for a loop by announcing that The Legendary Starfy would be coming stateside as well. Talk about random.

The Starfy series — better known as Stafy until this morning’s revelation of an official English name — has been around for nearly a decade, having debuted very early on Game Boy Advance. The series is up to its fifth installment at this point, the most recent two entries being DS titles. I’m going to assume the one being published here is the fifth game, but you never know with Nintendo. I’ve watched the series’ proliferation with some bemusement over the years, because I learned very early on that despite sporting lush 2D visuals and the Nintendo name, Starfy just isn’t that good. It’s Kirby-easy, but has a slightly adventure-based structure, which means lots of chatty dialogue that breaks up the action. The games aren’t terrible, but they’re awfully mundane. I can think of more interesting things for Nintendo to localize….

The most interesting thing about Starfy isn’t the games themselves, though. It’s the developer. Like about half of everything to come from Japan, the series is the work of stealth creator TOSE. The difference, though, is that this is one of the rare instances where TOSE’s name isn’t hidden deep within the credits and glossed over by a publisher that likes to pretend it does all its own work in-house. Au contraire, mon frère; quite the opposite, in fact: TOSE actually co-owns the Starfy series with Nintendo, making this the first series (to my knowledge) that they loudly proclaim as their own. This is where the wags snidely remark on the connection between TOSE and the humdrum nature of Starfy, but I don’t think that’s entirely fair. The company’s done some fine work, as in Rocket Slime. Like Level-5, I suspect TOSE is one of those companies whose output is only as good as the publisher decides it should be. Dragon Quest overlords Armor Project have a tendency to coax great work from third-party developers, while a lot of other companies seem to take the Ed Wood approach of saying “That’s brilliant!” at mediocrity and rushing to market.

Anyway, the point is that the Wii remake of Metroid Prime hasn’t been given a U.S. date yet, despite being available in Japan as of last week. Swear to god, if Nintendo tries to position that as their big holiday game there’ll be hell to pay.