The secret best RPG of February 2009…

…is, ironically, the one we’re not covering on our RPG blog. That’s because we’ve already talked about it on our retro gaming blog, you see.

I’m nearing the end of my journey through the Guadia Quest portion of Retro Game Challenge, and it’s been pretty amazing. If this had been a real RPG back in the NES days, the Guadia series would be a fondly-beloved B-tier RPG series on the level of Breath of Fire or Phantasy Star — OK, it’s not entirely fair to call Phantasy Star B-tier, but I figure when a series hasn’t seen an update to its original format in 15 years, it automatically gets demoted. Of course, Guadia Quest wouldn’t have been nearly as good as it is if it had been made 20 years ago; a good portion of its success is the result of having two decades and four generations of RPG design to draw upon. Like the rest of the titles in Game Center CX, Guadia Quest is very convincingly 8-bit until you start paying attention to the little details and remember that no console RPG back then let you save anywhere or gave you spells to double your walking speed in dungeons or let you level up so quickly or dispensed most of your equipment for free or…. 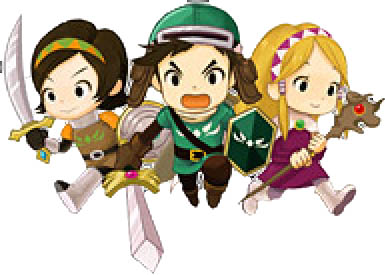 Anyway, having poured more hours into this game (sub-game?) than was necessarily healthy this weekend, I’m really impressed by Guadia Quest. The creators took Dragon Quest II as an obvious point of inspiration, but aside from the basic similarities — the three-character party, the fonts, the turn-based battle system in which enemies are grouped together — the two games aren’t actually that much alike. Guadia Quest is almost more of a dungeon crawl, with a very small number of utterly enormous dungeons to expore. They have numerous floors, maze elements, backtracking, hidden secrets, and ultimately boil down to a test of endurance: can you make it to the boss before you run out of difficult-to-replenish magic points? Kinda like Etrian Odyssey, actually.

It also has a graveyard duck, so that’s cool.

I compared the monster-taming element to Megami Tensei, but that’s not entirely correct. You can only have a single companion at any given time, and they amount to a single powerful but unreliable extra party member that occasionally steps in to contribute to the battle — though not always the way you want. Still, they’re pretty handy. They never go more than four turns without taking an action, so even in those unhappy occasions where your entire party is put to sleep and takes a defenseless pounding your companion monster will eventually turn the tide of battle. This doesn’t mean it’s impossible to lose, just that you get to tuck an extra weapon into your arsenal.

The sequel in the upcoming Retro Game Challenge 2, Guadia Quest Saga, is apparently supposed to be taken from a Game Boy Color equivalent, which I suppose would make it Dragon Quest Monsters. Apparently it allows multiple monster companions that may be swapped with friends (whether that’s real friends or imaginary, I’m not entirely certain). And that is why I need you to buy Retro Game Challenge tomorrow: I need to play this sequel. OK? Don’t let me down. I’m counting on you.