A good end to a crappy year: GameSpite Year One, Vol. 1 arrived today. Someone mentioned in the comments for my last update on the book’s status that the listed weight of 16 lbs. seemed a bit light for a box containing more than a hundred 350-page books, and it turns out they were partially correct. The box was 16 lbs. But it was the smallest of seven boxes. 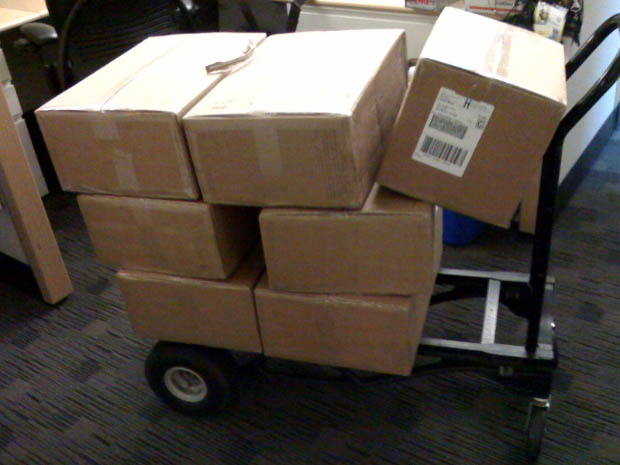 Uh, yeah. I guess I didn’t really appreciate the sheer scale of this operation until I saw a palette of books waiting for me at the office.

I brought home a batch of hardcovers to start doing custom sketches, but I confess there’s no way I’ll be able to ship all of these out right away. I’ll be mailing books in the order in which they were purchased and hopefully should have everything distributed by the middle of January — except, of course, for books ordered after the initial print run was accounted for. I’ll have to do a second printing on those, and they’ll arrive in February.

Logistical nightmares aside — I’ll definitely be taking a different approach to distribution with Vol. 2 — this is a great way to close out 2008. The books look fantastic. I don’t think anyone will be disappointed! Hopefully.