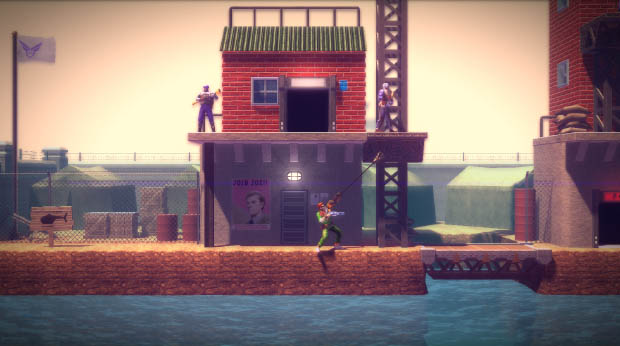 Bionic Commando Rearmed | Grin/Capcom | PSN/XBLA/PC | Retro platformer
I gave it: A | In retrospect, this was: Perfectly fair

So: I didn’t really have an unbiased perspective. If Rearmed had been a lousy remake of the game, I’d have hated it with excessive venom; if it had lived up to its legacy, I’d have no choice but to love it. Obviously, given the score I handed out, it turned out to be a worthwhile successor, and I loved it. In fact, my review text was glowing enough that the reviews team was convinced the accompanying score should have been an A+, but I’m old-fashioned and only hand out the top score when a game really, really impresses me. Like, really impresses.

Really, in order to understand why Rearmed is so gosh-darned good, one needs to quantify precisely what made the original version so great. First, it was vigorously innovative for its time. The arcade game that birthed the NES version was an interesting but flawed and ultimately fairly standard action game; for the home version Capcom thoroughly rethought the entire thing. The most obvious connection between the two titles boils down a few pieces of music and the grappling wire that serves as the fulcrum of the gameplay. Beyond that, the home version might as well have been from a completely different franchise: a story-driven, non-linear action game with an open (but structured) level selection format. Secondly, it used its innovations to maximum effect. Each level was progressively more challenging than the last, creating a perfect learning curve that forced gamers to hone their grappling skills in order to succeed. Third, exploding Hitler head.

It’s a sign of how good Bionic Commando was that the game has seen several follow-ups over the years, and each has carefully recreated the perfect levels designs of the NES games. (When the more recent games have diverged from Bionic Commando’s stage layouts, the results have been kinda lousy.) With Rearmed, developer Grin didn’t even bother to try venturing into new territory. Instead, they carefully transported the NES game into polygons. That’s not to say it’s a slavish remake, though; as much as the emphasis is on fidelity, Grin did a great job of recognizing the parts of the original that hadn’t aged with sufficient grace and reworking those elements to be friendlier to modern audiences. The limited array of bosses were expanded into new and interesting forms; the frustrating weapon and communicator system was reworked to allow players to take their full arsenal into each stage, thus doing away with the need to cancel out of a stage for making a poor equipment choice; the bullet-collecting level-up system was thrown out to make the earlier stages easier and the later stages harder.

And harder they are: the original NES game was pretty tough in spots, but Rearmed can be downright brutal. The new bosses can be tricky to sort out at first, but several remain difficult even after you figure out their patterns. The final level’s gauntlet of challenges and bosses is especially insane. (But, on the plus side, exploding Hitler head!) This is not a game for novices — or at least not for novices who don’t have the stomach to learn the game’s unique mechanics and continue working at the challenges laid down through each level until they triumph. For those who do have the necessary intestinal fortitude, though, Rearmed offers the satisfaction of a seemingly insurmountable challenge conquered — and advanced difficulty levels to really put their guts to the test.

Rearmed does have a pretty steep learning curve for newcomers, though. The game revolves around the use of a grappling hook to get about; no jumping allowed. This forces players to relearn a genre whose basic rules they’ve known for decades: in platformers you’re supposed to run, jump, and shoot. But that’s not how it works here, and the inability to hop over even the tiniest obstacle can be fairly infuriating at first. But once you learn to use the bionic arm, you’ll find swinging can be far more liberating than simple jumps. Even with in games with a double-jump mechanic, you’re always doing the same predictable thing every time. By grappling and swinging, though, you’re opening up a huge range of possibilities — a simple upward climb, a modest forward arc, or a wild leap of faith into the unknown, saving yourself from certain death with a perfectly-timed grab on a well-placed grapple point. The grappling wire also doubles for other functions, including lifting objects and (most satisfyingly) flinging foes to their doom.

Rearmed plays with its own history, too, with amusing little nods to Capcom’s retro heritage and some tongue-in-cheek references to the goofiest bits of the 8-bit game’s design and localization quirks. The midget warriors who were so pervasive on NES are lampshaded here with a couple of amusing dialogue exchanges; the dumbest lines from the horrible NES script are laughed at by heroes and villains alike. Combined with the thoughtfully recreated levels and carefully rebalanced weapons, the whole package reeks of fond affection for a classic combined with the skill and determination to do it justice by modern standards. And that’s precisely what Grin accomplished: Rearmed is a better-than-perfect recreation of one of the true gems of the NES, and its utter excellence is why I’m confident that the upcoming next-gen Bionic Commando — the NES game’s first true sequel ever, really — will be a successful leap into 3D.