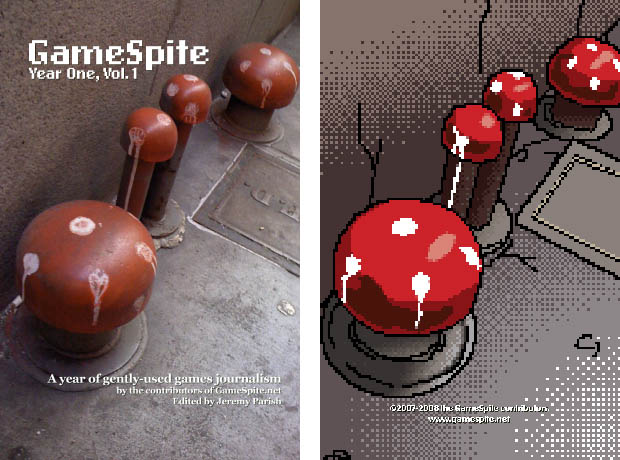 So the sample copy of the first GameSpite book should arrive next Wednesday, right? It just occurred to me that this works out to about a 10-day turnaround time on printing and shipping. That means that if I want to get the books out in time for everyone who wants one for Christmas, I should probably take orders now to have the shipping ready to go as quickly as possible. As added incentive, my webhost sent me a bill last night for the next two years’ worth of basic server fees — several hundred bucks, which doesn’t include the additional monthly fees for private bandwidth and databases — so it would be wise for me to round up cash moneys as quickly as possible so I can fund both the books and the site. Whoever compared GameSpite to the GIA the other day was right on one count, anyway: this stupid site is expensive to run.

So here’s how it is going to work: GameSpite Year One, Vol. 1 is a 352 page book that reprints half the articles published at GameSpite.net from the time the contributor system launched (June 2007, I think it was) to one year later. It’s half because the publishing company doesn’t allow for 700-page books. So you’re getting neatly alphabetized articles from A (actually 3 in Three) through L (Little Samson). Also included is a bit of never-before-published mystery material.

I’m having two different versions of the book printed up: roughly 100 paperbacks (possibly more in the extremely unlikely chance those sell out) and 20 premium hardbound books. The softbound books will sell for $25 apiece — which I realize is a lot for a 350-page book, but that’s small press for you. After printing and shipping and redistrubution and royalties for the contributors, the profits from 100 copies should be just enough to pay for the next two years of basic GameSpite hosting. The hardbound books will sell for $60 apiece, which, obviously, is a whole hell of a lot to pay for a 350-page book. But these include an original color illustration of your choosing, you know, as incentive. Also, the cost of both variations covers shipping, unless you live outside the U.S. or Canada, in which case you’ll need to pay an extra three bucks per book. Because shipping books via international airmail is expensive, it turns out.

Edit: Content listing (ripped directly from the dust jacket) behind the jump-cut.

Edit edit: My initial intended print run of hardcover books is, unbelievably enough, spoken for. But since nothing has gone to press yet, I’m willing to up the print count if anyone else wants one. However, any hardcover edition ordered after this point probably won’t arrive until January. Doodles take time. Also of note: I’ve sold exactly enough to cover the cost of printing and shipping for the entire run, which is good. It means I won’t be going in the hole for this and can start thinking about the second volume a few months from now.

Edit edit edit: Hardbacks are now gone forever. Sorry! You will have to live without my sloppy hand-drawn artwork.

Final edit: I am no longer taking orders as the book is well oversold. Second printing will be soon! And the first books are going in the mail this week. All books should be shipped by the 20th of January — sorry for the delay, but the printer was much slower to fulfill my purchase than expected.

One half of a year’s worth of articles from GameSpite.net: That is what this book is. More specifically, it’s a collection of sometimes-thoughtful articles about the following video games:

Includes many pages of never-before-published content and the best artwork we could scrounge up from the Internet!