Mr. Robot has to take a sabbatical from the Add to Queue column for a while, so I’m filling in for him in my tragically incompetent way. And so we have…Sad to Queue. Fans of bloody train wrecks, read on!

Heathers: Back in high school, I grew my hair long one summer and lost a bunch of weight, and soon after people started mistaking me for a girl — not least of all an enclave of female acquaintances who suddenly became my best buddies once I looked like one of them. It was like a harem anime, except minus all the sexual tension…so I guess not like a harem anime at all. Anyway, my rite of initiation into this circle of ladies was to watch Heathers with them. They seemed to love it, and I was much too polite to say that it seemed like a lot of very silly vicarious saber-ratting for disaffected loners. But really, yeah, I don’t think I’d enjoy it any more as an adult. Though I do find it quaint to see a movie starring both Christian Slater and Winona Ryder. Is it possible to more effectively capture the zeitgeist of the year that was 1991? Ah, if only the stupidly expensive special edition came with a can of Crystal Pepsi, it would be perfect.

Tropic Thunder: I’ve heard this is an amazing parody of Hollywood. And it has Jack Black and Robert Downey Jr., so that’s good! Oh, but Ben Stiller. I was forced to watch him in some terrible Farrelly Bros. movie (like there’s any other kind) a few weeks ago. He played a despicable creep, and now I hate him forever. As if Night at the Museum hadn’t already done the trick!

WALL-E: Best Pixar movie ever? No, not quite, but that’s like saying Eva Green isn’t quite the most beautiful Bond girl. Who cares! Some hairs are too fine to be split, you know? And speaking of which…. 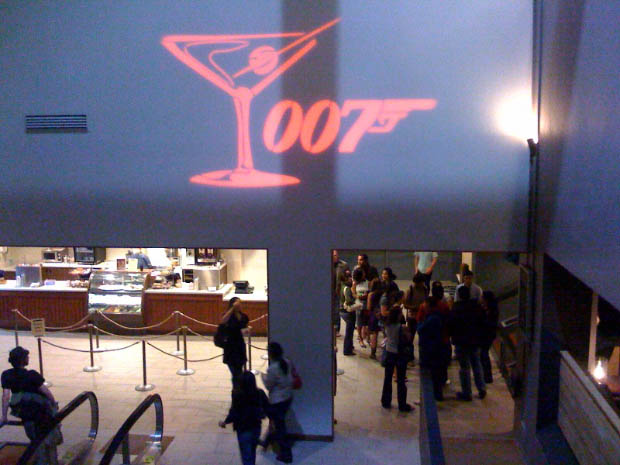 I’ve just returned from the Sundance Kabuki, where I saw Quantum of Solace, which I’d heard was awful. Apparently I hear from a lot of crazy people these days, as I really enjoyed the movie. It was a quintessential Bond movie, which is to say messy and flawed but awfully fun. I think two factors are souring people’s perspective on the film: one, it’s the sequel to Casino Royale, which was an extremely unconventional Bond flick that largely served to reboot the franchise and start from scratch. And two, it’s the sequel to Casino Royale, which is terribly uncommon for the series. Bond movies tend to have links, but rarely do they have direct connections, and none of them that I’ve seen have been so absolutely dependent on the prior installment for clarity. If you haven’t seen Casino Royale lately and don’t pay very close attention to the dialogue, you’re likely to find yourself lost partway through the story. But hey, that’s true for even the classic Bonds. The factor that determines whether a Bond movie works or not is whether or not those tenuous links hold up after you’ve had a few hours to think on them, and in this case: yes.

Really, the worst part of the film is the terrible camera work during action sequences. Casino Royale had the audacity to use a steady hand during fights and chases to give a firm sense of geography and choreography; Quantum tends to obscure what’s happening with bad lighting and nauseating jump cuts. Since we’ve seen Daniel Craig pull off solid action scenes, there’s really no excuse not to let us see more of it aside from lazy directing. I dunno, I feel like if I had a $200 million dollar budget I’d use it to make sure the cool parts of the movie were actually good.

Fortunately, the rest of the film did a good job of continuing the series reboot. Bond seemed more Bond this time, with a few subtle references to the older movies, a small but meaty role for Felix Leiter, and a nebulous and powerful shadowy organization on par with SPECTRE that (hopefully) will continue to exist in the background for a while. And hopefully its leader will come to a better end than the pathetic way Blofeld was written out of the older series. Honestly, no matter what you thought of Quantum of Solace, it is better than every Roger Moore film put together. So quitcherbitchin, Internet.