Times are tough, money is tight, the world is plummeting into violent riots of poverty, blah blah blah. But sometimes, you gotta budget in the essentials. This week, that was the Genesis 1970-1975 Box Set: a compilation of five very thoroughly remastered and remixed albums. Frickin’ awesome albums, it should be said. 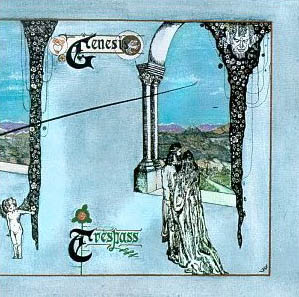 Of the set, the disc that’s most caught my attention is the first album, Trespass. Actually, Trespass is the band’s second album, but their first wasn’t included in the box for a number of reasons. Such as the fact that it’s eternally bogged down by legal rights thanks to an overzealous, self-aggrandizing hack; also, the part about it not being very good. Trespass, on the other hand, is much better — raw at times, naïve in places, but ultimately a pretty impressive piece of work for a bunch of stuffy, upper-class British college kids.

The new mix actually does away with a lot of the “raw” problem — the audio has been improved to an almost unbelievable degree. All the background hiss that’s plagued previous CD releases is completely gone, and each master track has been cleaned up so much you can hear the keys clacking during Peter Gabriel’ flute solos. Elements that were lost in the muddiness of previous mixes are suddenly perfectly audible, and harmonies and audio effects I’ve never noticed in nearly two decades of listening to the album suddenly pop out. It’s impressive! The album’s almost 40 years old, but doesn’t sound like it.

Well, at least not in a technical sense. The songs themselves, though…yeah, they sound about 40 years old. Trespass is sort of a transitional album between the airy, overproduced ballads of proto-Genesis and the dark progressive rock of band’s so-called classic years. The dopey strings of the first album are gone, and the songs are a lot more ambitious — it’s a 40-minute album with a total of six tracks, so already you’re seeing that trademark prog rock excess. And no wonder; Trespass came a year after King Crimson’s In the Court of the Crimson King, and it totally shows. It’s almost a sort of tribute album, with the same dark atmosphere; the same sudden, crashing, percussive pauses; the same overwrought lyrics.

Well, not as overwrought. No one out-Pete Sinfelds Pete Sinfeld. Despite Trespass‘ obvious debt to King Crimson, the album has its own distinct sound — a more stripped-down approach to prog. There’s no pretense of orchestration (likely as a reaction to their first album’s horrible, excessive, overdubbed wall of sound), and Anthony Philips’ guitar work is energetic without resorting to indulgent Frippery.

Honestly, Trespass is a more even work than In the Court of the Crimson King; it’s mercifully free of aimless noodling like “Moonchild,” and the second half of the album (“sides,” we used to call ’em) is an impeccable trio of songs that spans a whole range of moods and tempo. And by “whole range” I mean “different shades of melancholy and menace”: “Stagnation” is a meditation on, uh, something. Something not very happy, given that the song talks about an ice-cold knife decorating the dead, and about subsisting on minnows fished from slimy water. “Dusk” is a meditation on mortality. And “The Knife” is a very angry call to rebellion:

Lesson: don’t piss off Peter Gabriel. He is mad, bad, vindictive and thoroughly costumed. The first half of the album isn’t quite as strong, though, mainly because the middle track on side one is a frankly ludicrous narrative about a fugitive wolf who mucked about with the trappings of wolf royalty and had to die. Mmmyeah.

Well, I guess no band’s perfect. But even so, Trespass is an unfairly overlooked milestone in the history of a band that is, let’s face it, way better than you give it credit for. For shame!

15 thoughts on “Outcast he trespassed”