Swing and a miss

I was worried that the advent of digital distribution this console generation would mean the death of packaged collections. I’m all for digital distro, but at the same time I’m also a fan of economical shopping. Eight bucks for a copy of Sonic the Hedgehog isn’t nearly as appealing as $30 for Sonic the Hedgehog and two dozen other games. And, I admit it, physicality is a part of the gaming experience I just can’t give up. There’s something satisfying about having a game in your hands, selecting your choice of game to play from a shelf rather than from a menu — even if the selection you make is a compilation which in turn offers a bunch of menus. The important part is that physical link, the sense of contact and presence. Because I’m a stupid old man who can’t escape nostalgia, you see.

So I was happy this morning to see a press release for the Mega Drive Ultimate Collection for Xbox 360 and PlayStation 3. Containing no less than 40 (!) games, including “Sonic the Hedgehog 1, 2 and 3, Columns, Alien Storm, Ecco the Dolphin, Space Harrier, and cult classic, Streets of Rage 1, 2 and 3,” it looks like a pretty solid deal, and is a reassuring sign (along with Namco Museum Virtual Arcade) that compilations aren’t dead and buried. Why, it could even be a better deal than the Genesis compilation that showed up on PS2 a few years back. And given that the Sega Ages collections for PS2 are spot-on perfect, I have every confidence that–oh, wait, what’s this? “Developed by Backbone Entertainment”?

Well, crap. So much for that confidence. Backbone’s work on Xbox Live ports has been…uh, well, pretty awful, to be honest. Fuzzy, muted sound; fuzzy, filtered, off-color graphics; mushy controls; slightly off timing. I like the company’s original content, like 1942: Joint Strike, but their Genesis emulation does no one any favors. 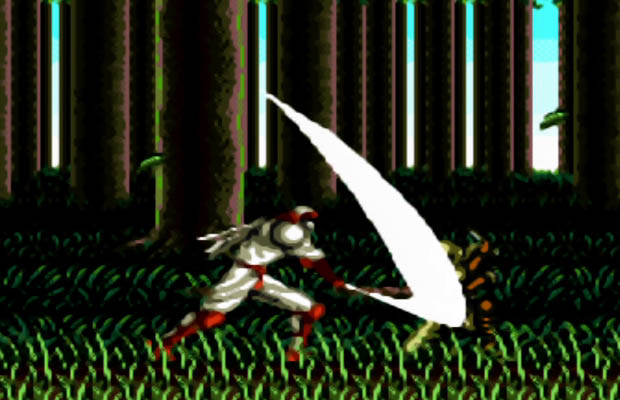 I mean, my god: this is a 1:1 scale crop of a screenshot they actually sent out with their press release. They’re actually using this image to sell their game! If I saw someone playing an emulator with this filter running, I’d take away their computer privileges for life. (Well, actually, first I’d probably blink to check that I hadn’t suddenly developed cataracts.) But we’re expected to pay for…this. What a tragic, terrible, heartbreaking missed opportunity. You see, Sega has the world’s single best professional emulation crew under its wing: M2, a mysterious little Japanese developer whose catalog includes both the good Sega Ages (beginning with the Treasure Box) and the Genesis emulator on Virtual Console. Their work is impeccable — beyond impeccable. They treat each game as if it were a precious gem, even when (in the case of, say, Dynamite Headdy) the game may not necessarily deserve such reverence. Their compilations to date haven’t simply been great; they’ve been beyond perfect, offering comprehensive selections, amazing archival materials and spot-on standard and progressive output. For a brief, shining moment, I hoped that this upcoming collection would bring their work into a single, truly comprehensive collection. But, no.

Of course, I understand what’s going on here. M2 only works on PS2 and Wii, because Japanese developers are allergic to/terrified of/reluctant to deal with HD-capable systems, and Sega’s no exception. I mean, the company just released Thunder Force VI as a PS2 game in Japan, even though the de facto shoot-em-up console these days is the 360. If you put the staff of M2 in the same room as a 360 dev kit, they’d probably just break down a weep uncontrollably. And that is a true shame, because no one seems to have the perfect solution to bringing classic games to HD; if anyone could solve this problem, that genius would likely be someone at M2. Meanwhile, rather than work with each game individually I’m sure Backbone just dumps everything into a single Genesis emulator and saves Sega a ton of cash. So don’t be fooled by the lie: this will be no “ultimate” collection. It will be a big, messy collection — a sloppy makeout session that you’re embarrassed about the next morning when what you really want is to settle down and find the one. Of course, this is precisely why some of us will continue to pay $8 for Virtual Console releases when compilations are cheaper: one form offers exceptional quality, one form…doesn’t. You really do get what you pay for, it seems.

So…I’m going to take this as another sign to encourage you to buy Valkyria Chronicles. Prove to Sega’s Japanese side that next-gen consoles are not, in fact, terrifying forced marches to failure with your wallet. Bonus: it’s a phenomenal game — I even broke my vow of new release chastity to order a copy.