The title of this post has nothing to do with the title of the post below. It’s one of those weird coincidences where I formulated my own post in my head on the way home only to log in and find someone else had written something with an eerily similar title — though not at all about the same topic.

Nah, this is about the mysterious Beatles/MTV announcement due in the morning. The one that all gaming publications are somehow on the hook for. Hmm, what could it possibly be? Obviously, it means we can expect to find Beatles tunes in some form of MTV music game Rock Band soon.

This neatly answers a question that bugged me when I played the new Guitar Hero last week — one that I was planning to blog about soon, in fact. (I guess this saves the me trouble.) I was happy to see “Band on the Run” included in Guitar Hero, because who doesn’t love Wings? And I couldn’t complain about “Beat It,” because Michael Jackson’s Thriller was unspeakably huge when I was in elementary school. I mean, seriously, it’s hard to explain just how pervasive and awe-inspiring it seemed back then unless you happen to also have been an impressionably youngster, in which case you already know. “But hey, don’t Paul McCartney and Michael Jackson collectively hold the rights to the entire Beatles catalog?” I asked myself. “So why do they have songs in Guitar Hero, but there are no Beatles tunes? They’re great songs, but hardly sacred.”

I guess the answer is pretty obvious now: there are no Beatles songs in Guitar Hero because they’re all exclusive to Rock Band. And I’ve gotta say, if MTV decided to put out a version of Rock Band that was nothing but Beatles, I would buy that so fast it would…it would be, uh, very fast. Yes.

I can’t wait to activate my Star Power for “Her Majesty.” Wait, wrong game. 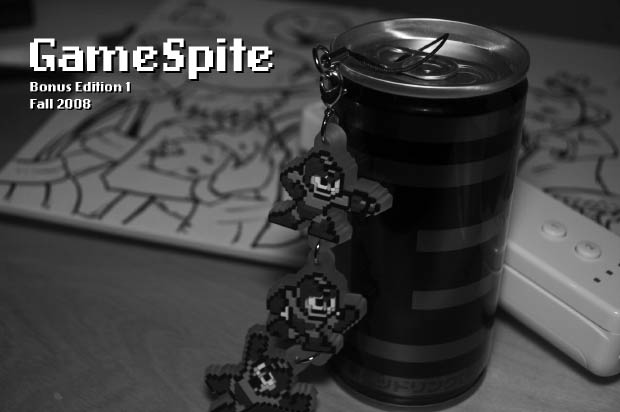 Also, I took reader advice on the cover of the bonus magazine. I wasn’t happy with the art, of course, but I liked the alternate suggestions you guys came up with. Why not use sprites? Why not take a photo? So I combined the two and took a photo of sprites, and tossed the original artwork in there for the heck of it. Hopefully it will photograph well! I’m quite happy with the pic, I must say. So thanks, random commenters!

Edit: It sounds like the new Beatles thing won’t be Rock Band-related at all, but rather a Beatles-branded version of Peter Gabriel’s XPLORA-1. Say it ain’t so, Paul, lest I weep right alongside my guitar.

9 thoughts on “Please please me”