I’ve been terribly hard at work this weekend struggling through the odious chore of sitting around watching old James Bond movies on Blu-ray. No, really, it’s for work, honest.

It’s been an enlightening experience; prior to this, the only Bond films I’d ever seen all the way through were a couple of the depressingly average Brosnan movies and the considerably more entertaining Casino Royale. (The Daniel Craig one, not the weird satire featuring Woody Allen.) Besides those, the majority of my life’s Bond experience has been seeing bits and pieces of the films on TV when I was a kid; if memory serves, severely-cropped and heavily-edited Bond movies were a mainstay of Saturday evening television throughout the ’80s. And little wonder I’ve never felt compelled to rush out and track down more Bond. Most of the films they ran on TV were of the Roger Moore era, and now that I have a wider context of Bond actors to draw upon, I can see why the franchise always used to strike me as boring and archaic: Moore is a really lousy fit for the role.

It’s very strange that Moore’s films, despite being of a considerably more recent vintage than Sean Connery’s, feel a lot more dated. Part of that is due to the themes (mysticism and sci-fi) and the music (less orchestra, more disco) and the film quality (fewer saturated colors, more dull earthiness). But a lot of it has to due with the fact that Moore himself feels like he comes from an earlier era than Connery. His suits are never as smartly-tailored, his movements never as economical; he never seems genuinely invested in the action sequences, and sort of glides through the plot on a cloud of quips and sardonic eyebrows. The concept behind Bond was always a rather nasty piece of work wearing the persona of an English gentleman as a disguise, whereas Moore just seems like…an English gentlemen. The sort of fellow you’d want to have as your kids’ godfather, but perhaps not the ideal candidate to save the world from supervillains.

And man, it sure doesn’t help that the HD treatment makes his real age so much more obvious. When he convinces a reluctant young Jane Seymour into bed against her better judgment, he comes off not so much as a dashing charmer as he does a filthy old lech. It gave me the same sense of uneasiness I felt when I accidentally wandered into Shibuya’s love hotel district last week. Old men walking close by unenthusiastic young women toward neon signs offering discounted “rest” rates. Yech. 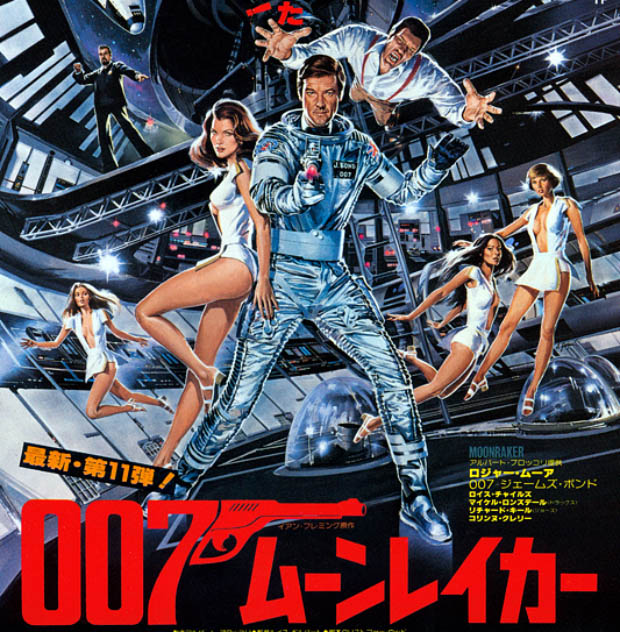 Ironically, though, it looks like it was the Japanese who had the right idea back then — they made Bond look rather conspicuously unlike Moore in this Moonraker poster. Of course, any dignity that might have lent the production was instantly shattered by the free-floating Jaws swooping down to chomp his un-Moore-like neck. To say nothing of the sexy space love-slave nurses, or whatever those are supposed to be.

And as they say over in that part of the world: 1UP’s movie blog should be launching soon. Please look forward to it. (bow)

17 thoughts on “Moore is less”